International observers from India, the US, Australia and the United Nations will be monitoring the election with a national holiday called for voting day.

About 300,000 Bhutanese are eligible to vote, but many regard the looming changes with trepidation and practice polls in April and May saw a turnout of only about 40 per cent.

Ahead of Monday’s vote Kuensel, the nation’s official newspaper, said that many potential voters in the capital, Thimphu, had been reluctant to head back to villages as required and had not received or applied for postal ballots.

Bhutan‘s transition to democracy began when former King Jigme Singhye Wangchuck announced he was handing over power to his Oxford-educated son and transforming the monarchy to a more ceremonial role.

Before abdicating he circulated a draft constitution that would end almost 100 years of monarchical rule.

Under the plan, which comes into effect after the election of parliament in 2008, the king will become head of state, but parliament will have the power to impeach him by a two-thirds vote.

Nestled high in the Himalayas and sandwiched between India and China, Bhutan is about the size of Switzerland and has until recently had little contact with the outside world.

International media were barred from the country until 1974 and television broadcasts began only in 1999.

Just 6,000 foreign tourists are allowed to visit per year, restricted to carefully supervised tours designed to preserve the country’s environment and culture. 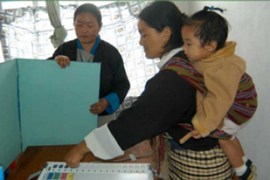 The polls are designed to teach voters and officials about the election process. 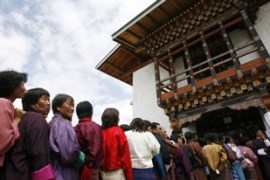 Mock parties contest the vote ahead of a planned democratic transition. 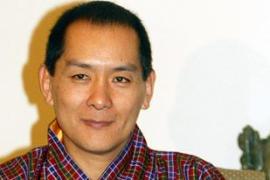 Residents of the kingdom say they are saddened as the king abdicates voluntarily.