Anger against Pervez Musharraf, the Pakistani president, burns strongly among Bhutto supporters, with many believing that elements within the administration played a role in the killing.
“Curse on Musharraf, Musharraf is a killer,” crowds screamed on Sunday in the southern village of Naudero.

“But her blood will not be in vain … Bhutto will remain alive in the hearts of people.”

Beating their chests, the crowd gathered on the third and final official day of mourning for Bhutto, who died on Thursday in a suicide bomb and gun attack at a rally for general elections scheduled to take place in a little over a week.

A decision is expected within 24 hours from an emergency meeting of the election commission on whether or not to postpone the election in light of the killing and civil unrest.

Police struggled to control the crowds, many of whom had walked kilometres to get there.

Inside her home, leaders from her Pakistan People’s Party were preparing to meet to choose an heir to the leadership and to decide whether to boycott or contest elections, and possibly call for a delay to allow it to reorganise in the wake of Bhutto’s death.

Pulling out of the vote altogether would destroy the credibility of polls which were seen by the United States and other Western nations as key to promoting stability in the country as it battles rising extremism.

There were no immediate reports of rioting early on Sunday.

Since Thursday, unrest has caused tens of millions of dollars of damage and the army has been deployed to keep order in some Pakistan cities.

Streets in Karachi, site of much of the violence, were generally quiet and deserted, witnesses said, although Reuters news agency reported a disabled man was burned to death when a petrol station in the city was set on fire.

The financial capital and main port of the country has been paralysed by the violence. Shops have been shuttered, petrol stations closed and railways attacked by mobs, bringing transport to a standstill.

They have also wrecked nine election offices – along with the voter rolls and ballot boxes inside – hampered the printing of ballot slips and the training of poll workers, the election commission said.

Shocked citizens blamed the deepening turmoil on Musharraf and his US-backed crackdown on so-called extremists and tribal fighters.

Zaheer Ahmad, 47, who works at a private clinic in Multan, said: “The government of Musharraf has created an Afghanistan and Iraq-like situation in our country.

“I don’t know who killed Benazir Bhutto. But I do know that it is the result of Musharraf’s wrong and bad policies.”

In fresh violence, two men blew themselves up close to the residence in eastern Pakistan of Ijaz ul-Haq, the former religious affairs minister and senior leader of the ruling Pakistan Muslim League-Q party, police said.

Zafar Abbas Bukhari, the district police chief, said both men died, but there were no other casualties.

Sohail Rahman, Al Jazeera’ correspondent in Islamabad, said: “Ul-Haq was partially responsible, a part of the core group that made the decision to storm the Red Mosque in the capital in July.”

Police found scattered body parts and the wreckage of a motorcycle at the scene of the blast, and suspect they either met an accident or fell from the bike, detonating the explosives.

Another police officer said: “We have retrieved two heads, which are badly mutilated and cannot be identified. One appeared to be in his early 40s while the other is a younger one.

Historically significant, Zia ul-Haq, his father, was the former military ruler who coincidentally ousted the then-prime minister Zulfikar Ali Bhutto, and had him executed in 1979.

Ul-Haq had been identified as a possible target after a suicide attack on Aftab Ahmed Khan Sherpao, a former interior minister, last week that killed more than 50 people. 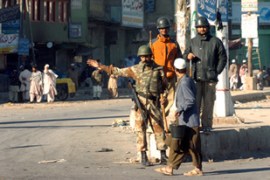 Debate over cause of late PM’s death intensifies as amateur footage emerges. 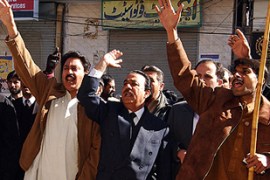 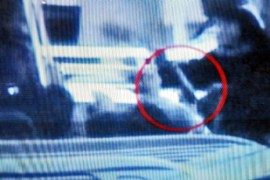 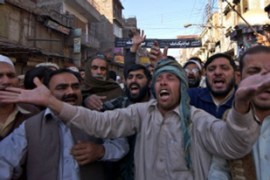 Paramilitary officers given “shoot on sight” orders to quell demonstrators.