Analysts say Mbeki wants to remain at the helm of the ANC to influence the country’s politics and help pick his successor.
Leadership struggle
Under his current mandate Mbeki could remain state president until 2009, but said at the weekend he did not rule out early parliamentary elections if he lost his position as ANC leader at a party conference on December 16-20.
ANC officials could not immediately be reached for comment.
In an interview with the Sunday Independent newspaper, Mbeki rejected suggestions that he would be a lame-duck president if Zuma won the ANC contest, saying the parties current policies would continue.
Zuma has large grass-roots support, especially in his own province of KwaZulu-Natal, but his reputation has been affected by allegations of corruption.
He was also put on trial for rape, but was found not guilty though he admitted having unprotected sex with a woman who he knew to be HIV positive.
If Zuma wins the ANC leadership in December, he is almost certain to become South Africa’s next president.
Analysts say this concerns investors who worry Zuma’s links with left-leaning unions could steer him away from market-friendly policies.
Under South Africa’s constitution, Mbeki would be barred from standing for a third term as state president.
Source: News Agencies 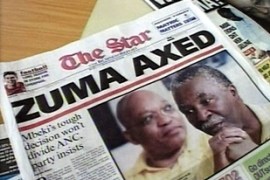 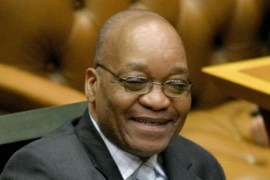 Court rules documents seized by police can be used against senior ANC leader.