Sharif, who returned from seven years of exile on November 25, had threatened to boycott the elections but submitted his nomination papers last week.
‘Politically motivated’
Sharif says the convictions secured against him in the wake of his 1999 removal by Pervez Musharraf, the current president, were politically motivated.
His exclusion from the vote is likely to be seen by the opposition as the result of pressure on election officials by Musharraf.
“I’m very clear that there is somebody else who is manouevring things,” said Imtiaz Kaifi, one of Sharif’s lawyers, adding that the Pakistan Muslim League (N), Sharif’s party would decide whether to appeal.
“This shows the election is based on rigging. General Musharraf can’t face Mr Sharif in the polling that’s why he has been denied to contest the election,” said Ahsan Iqbal, a PML (N) spokesman.
Benazir Bhutto, another former prime minister who returned from eight years in self-imposed exile in October, says her party will take part in the election although she has left open the option of joining Sharif in a boycott.
Source : News Agencies 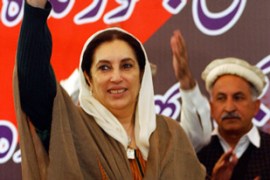 Bhutto and Sharif to discuss vote

Pakistan ex-PMs hope to thrash out differences on taking part in January election. 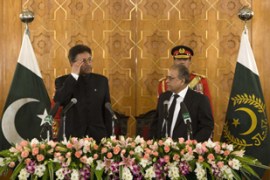 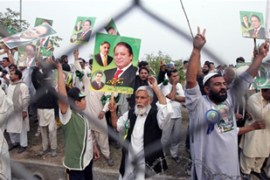 Attorney-general says former exiled Pakistan PM could be barred due to life sentence.