Zuma recently defeated Thabo Mbeki, the president, in an election contest to take over as leader of the ANC.

Mbeki fired Zuma as deputy head of state in June 2005 after Schabir Shaik, his financial advisor, was found guilty of soliciting bribes on behalf of Zuma.

Corruption charges against Zuma were dropped in 2006 when a judge dismissed them after it emerged that prosecutors did not have enough evidence.

Zuma’s supporters view the the investigation, as a conspiracy mounted against him by the Scorpions, a a criminal investigation unit set up by Mbeki.

Al Jazeera’s Kalay Maistry, reporting the Johannesburg, the capital, said the charges may impact on his leadership.

“If the evidence against him is strong, and makes the pubic think that he does have to explain these charges and accusations, the ANC may consider giving the leadership to another candidate.”

Hulley said the timing of the indictment was “peculiar” and that it proved the Scorpions were “influenced and their prosecution [is] informed by political considerations”.

He said: “The timing of the service of the indictment is calculated to quickly redress the popular support and call to leadership of the ANC which Zuma’s election so obviously demonstrates.”

Zuma, who had no formal schooling and was a leader of the exiled ANC’s military wing, is considered a populist leader with strong backing from the union movement, which wants him to push through more pro-poor policies.
Source : Al Jazeera, News Agencies 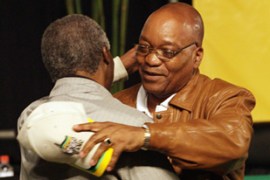 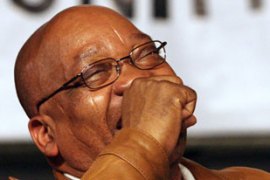