‘Important chapter’
Tsang, who announced the ruling, said China would allow direct elections for the chief executive in 2017, with changes made gradually starting in 2012, the date of the next leadership race.
Direct elections for all legislators could follow in 2020 at the earliest, Tsang quoted the decision as saying.

Tsang praised the Chinese government’s decision, saying a “timetable for attaining universal suffrage has been set”.

He said Hong Kong was entering “a most important chapter in its constitutional history”.
However, he urged political parties to reach consensus on the issue.
“If emotional debate and conflict between political parties drags on over this matter, Hong Kong’s stability and development will be severely hampered,” Tsang said.
Protests held
Pro-democracy activists expressed their anger at China’s decision, with hundreds attending a demonstration on the streets of Hong Kong on Saturday.
They held banners that read “democracy delayed is democracy denied” and “no compromise at all”.
Many said the territory is politically mature enough to choose its own government and noted that the majority of Hong Kong’s people have stated they wanted direct elections.
“We are extremely disappointed – you could say we are furious – about this decision in ruling out 2012,” Albert Ho, the Democrat Party chairman, told a Hong Kong government-run radio station on Saturday.
“The wishes of the Hong Kong people have been totally ignored.”
Source: News Agencies 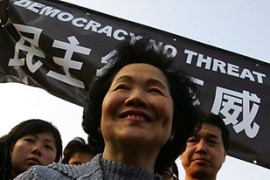 The win is expected to boost pro-democracy campaign in the territory.