Friday’s announcement came as Bhutto was buried in her ancestral village in the province of Sindh against a backdrop of continued violence, with the death toll from disturbances rising to 31.
Death’s causes
Cheema also said Bhutto had died from injuries caused by hitting her head on her car’s sunroof as she came under fire, rather than from bullet wounds or shrapnel.
Earlier reports said Bhutto was gunned down by an assassin.
The assassin then blew himself up in an attack that killed a total of 16 people at the end of an election campaign rally in Rawalpindi on Thursday.
While pointing the finger at al-Qaeda, Cheema said Mehsud was also behind a suicide attack on a Bhutto rally in October that left 140 dead.
Pakistani authorities say Mehsud is based in the tribal region of South Waziristan.
‘Pack of lies’
Cheema’s claim that Bhutto’s death was not caused by bullet wounds but by head injuries was described as “a pack of lies” by an aide of the slain politician.
Farooq Naik, a senior official in Bhutto’s Pakistan People’s Party (PPP), said: “Two bullets hit her, one in the abdomen and one in the head.

“It is an irreparable loss and they are turning it into a joke with such claims. The country is heading towards civil war.”

Kamal Hyder, Al Jazeera’s Pakistan correspondent, said people were asking why the car in which Bhutto was travelling was not damaged by the fatal attack.

Questions have also been raised as to why the scene of the attack that killed Bhutto was hosed down by the authorities soon after the blast, a move that may have destroyed valuable evidence.
Earlier on Friday, hundreds of thousands of mourners gathered for Bhutto’s funeral in front of the mausoleum in Garhi Khuda Bakhsh, a village 5km from the Bhutto home in the town of Naudero in Larkana district.
The 54-year-old Bhutto had been hoping to lead the PPP to victory in the January 8 parliamentary election, having been prime minister twice before.
Grieving supporters
Supporters arrived by tractors, buses, cars and jeeps that were parked in dusty fields surrounding the mausoleum – a vast, marble structure.
Weeping in grief and chanting slogans against figures in the pro-government political party, they formed into hundreds of rows for the funeral prayers.

Asif Ali Zardari, Bhutto’s husband, accompanied the closed coffin draped with the PPP’s green, red and black tricolour as it began the 7km journey by ambulance.

Some protesters chanted defiance: “No matter how many Bhuttos you will kill, a Bhutto will emerge from each house.”

Bhutto had returned to Pakistan from Dubai in October, ending more than eight years of self-imposed exile after reaching an understanding with Pervez Musharraf, the Pakistan president.

She survived a suicide-bomb attack during her homecoming procession in Karachi that left about 140 supporters dead.

The are fears that the January 8 polls will not now go ahead after Nawaz Sharif, another opposition leader and former prime minister, said he would boycott the poll.

The PPP also said it would observe a 40-day period of mourning.

Ameen Jan, a Pakistani political analyst, told Al Jazeera that the PPP needed to find a new leader to achieve its political goals.

“In terms of leadership contenders, there are several, including Makhdoom Amin Fahim, the vice-chairman, who, since yesterday,  became the person holding the reins.” 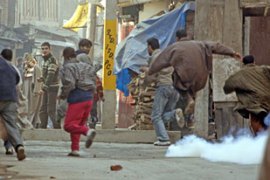 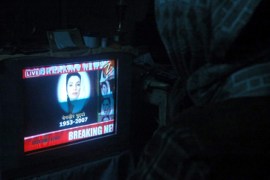