Al Jazeera’s Andrew Simmons in Nairobi said that there were queues more than one kilometre long to the polling stations.

“It is chaotic. There are not enough polling stations to go around and there are too many people,” he said.

“But many people here say that they have never seen numbers like this. That people are energised they feel so strongly that they want to vote.”
Simmons said that it is likely that polling stations will stay open two hours longer than expected at the recommendation of EU election monitors.
Some 14 million of Kenya’s 36 million people are eligible to vote in the election. Official results are expected from Friday.
Local broadcaster KTN and Odinga’s Orange Democratic Movement (ODM) had accused the government of disguising police as party agents to carry out fraud at polling stations.
When buses carrying officers arrived in different locations of Nyanza from Nairobi, crowds responded angrily and threw stones, accusing them of a plot to rig the polls, witnesses said.
“They started attacking them. One died on the spot, another on the way to hospital,” police spokesman Eric Kiraithe said of the fracas late on Tuesday in one location, Mbita.
The other confirmed death was on Wednesday morning.
A media source in Nyanza, who asked not to be named, said there were in fact four deaths, while an election official told Reuters, on condition of anonymity, nine were feared killed.
Presidential denial
With Thursday’s presidential and parliamentary vote seen as a big test of Kenya’s democratic credentials in a continent plagued by election controversies, Kibaki denied the rigging accusations and urged Kenyans to stay calm.
“Let us all embrace peace and let fair play, honesty and democracy prevail,” he said in a statement on Wednesday.
And a government spokesman accused the media of fomenting the violence by peddling propaganda.
“The mobs killing people in Nyanza are doing so after … alarmist and unsubstantiated rigging media claims,” Alfred Mutua said.

“In Nyanza, policemen are being hunted and killed … We are shocked that people have set up road blocks and are removing people not from there from buses.”
One Nyanza resident, who identified himself only as Peter, confirmed he had been among a crowd attacking officers.
“Over 20 administration police officers in civilian clothes arrived late on Tuesday in Migori on two buses. We immediately suspected them and started beating them,” he told Reuters.
KTN has been running images of civilian buses taking police out of a Nairobi training college under cover of darkness.
It quoted sources saying the police were stripped of usual ID and given letters accrediting them as agents of Kibaki’s Party of National Unity (PNU) to access voting stations.
Odinga said “they were issued each with 1,000 pre-marked ballot papers to be stuffed by them”.
“I’ve appealed to President Kibaki to prevail on his agents against election rigging acts that could plunge this country into bloodshed.”
Kibaki said his government had deployed 65,000 security personnel across Kenya to ensure security and “we should desist from harassing or obstructing them”.
Big Men’s rule
In 2002, the country experienced a rarity in African politics: the broadly peaceful transition of power from one “big man” ruler, Daniel arap Moi, to another, Kibaki.
Since coming to power in a coalition of big men the economy has had a strong five per cent annual growth on average and Kibaki has introduced free primary education.
He also has the support of his economically powerful Kikuyu tribe, Kenya’s largest.
But while Kenya is east Africa’s economic powerhouse, more than half the population live in poverty and Kibaki is accused of not effectively tackling issues such as corruption and poor infrastructure.

Many say he has an image problem, declining all media interviews on the campaign trail.

The big men allied to him when he swept to power broke away and their Orange movement hit the president with a landslide defeat in a constitutional referendum three years ago.
And Odinga has emerged as the front-runner after the orange movement splintered and the big men went their separate ways.
Odinga has the ardent backing of his western Luo community, but has also garnered support from other ethnic groups who think the Kikuyus have had it too good under Kibaki.
All but one of the opinion polls since September have put Odinga, a 62-year-old businessman and former political prisoner, a few points ahead of Kibaki, 76.
Kibaki has said he will step down, and retire to his highland farm, if he loses. But analysts believe those around him might not be so willing to relinquish power.
Source : Al Jazeera, News Agencies 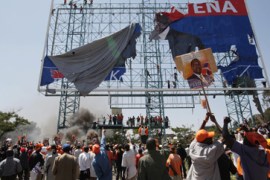 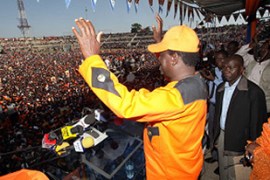 Tensions simmer ahead of Kenya vote 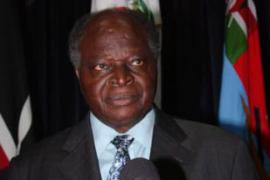 Fights as campaigning in Kenya ends 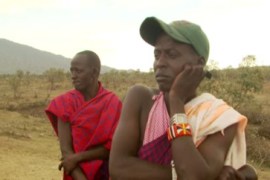