Among the deadly incidents in Sindh province, six people were burnt to death in a leather factory in Karachi when it was set it ablaze, police said.

It was not known if the victims were counted in an official death toll from the violence of 32.

Elsewhere a policeman was killed in the Jacobabad area of Sindh when about 1,500 people stormed a police station and set it on fire.

Meanwhile, a remote-controlled bomb in the Swat Valley killed eight people, including a local political ally of  Pervez Musharraf, the president.

One person was reported to have been killed in violence in the province of Punjab.

In Islamabad, the capital, about 100 protesters burned tyres in a commercial area of the city.

“Paramilitary rangers have been given orders to shoot on sight if they see miscreants indulging in anti-state activities,” Major Athar Ali, a spokesman for the force, said. 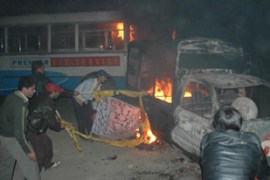