The AFP news agency reported an unnamed Chadian official as saying the six charity workers should leave the country Friday.
The workers had been sentenced to eight years’ hard labour by a court in Chad on Wednesday.
When the convicted workers return home, the French justice system could commute or reduce their sentences, as Paris does not have forced labour for prisoners.
Darfur orphans
The French nationals were arrested in October as they tried to fly the children, aged one to 10, to Europe for fostering with families.
Zoe’s Ark had said it was helping to rescue orphans from Sudan’s war-torn Darfur region across Chad’s eastern border.
But most of the 103 children were found to have come from families in Chadian border villages who were persuaded to give up the infants with promises of education at local centres.
Lawyers for the aid workers later said intermediaries had tricked the charity into taking the children when they had genuinely believed they were rescuing Darfur orphans.
Court order
After weeks in an orphanage in the eastern Chadian town of Abeche, a court order has reportedly permitted that the children can return to their families.
A Chadian and a Sudanese accused of acting as accomplices to the Zoe’s Ark group were sentenced by the court to four years in jail, while two other Chadians were acquitted.
The eight convicted were also ordered to pay 6.3 million euros to the families of the 103 children.
Source: News Agencies 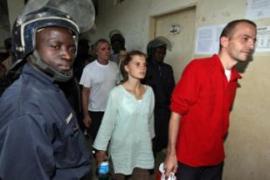