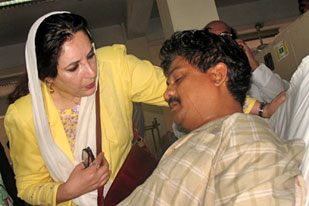 Bhutto’s return to Pakistan
was marred by tragedy [AFP]

Upon ending eight years of self-imposed exile Benzair Bhutto described herself as “emotionally overwhelmed” as hundreds of thousands of supporters greeted her in Karachi, the stronghold of her Pakistan’s People’s Party.

The jubilation turned to despair that day, on October 18, when 139 people were killed in a bomb attack on the former prime minister’s convoy.

She was unhurt in the attack, but two and a half months later, another bomb claimed her life.

On December 27, a suicide bomber killed her and at least a dozen others as she campaigned for election in January.

Before Bhutto returned to Pakistan, Pervez Musharraf, the president, had signed an amnesty for politicians, clearing the way for a possible power-sharing deal with her.

But under the state of emergency, she denounced Musharraf’s crackdown of the media and judiciary and vowed not to work with him, first demanding he step down as chief of army and then as president.

Her image as a popular democratic leader had been battered by persistent allegations of corruption and money laundering but moving against the president heralded her return to opposition leadership.

She held the prime minister’s office on two occasions, from 1988 to 1990, and from 1993 to 1996, but both terms ended in dismissal by the president amid allegations of corruption.

Bhutto, who had achieved worldwide popularity for her dynamism, was criticised as being a symbol of bad governance and self-serving politics.

Born in 1953 in Pakistan’s Sindh province, her father, Zulfikar Ali Bhutto, was the country’s president in the early 1970s, before later becoming prime minister.

n 1979, she was jailed in the wake of a military coup by General Zia ul-Haq, which led to the overthrow of her father, who was later executed.

She was permitted to go to Britain in 1984, where she set up a PPP office and took over the party leadership from her mother, Begum Nusrat Bhutto.

She returned to Pakistan from London in 1986 and won democratic elections just two years later to become Pakistan’s first woman prime minister, at the age of 35.

In 1999, both Bhutto and Asif Ali Zardari, her husband, were sentenced to five years in jail and fined $8.6 million on charges of taking money from a Swiss company hired to fight customs fraud.

A higher court later overturned the conviction as biased.

She insisted that all corruption charges against her were set up by political adversaries.

Bhutto had returned to Pakistan to campaign for third term as prime minister.

After vowing not to enter into an agreement with Musharraf, she aligning with long-standing political foe and fellow former prime minister Nawaz Sharif.

The PPP remains a popular choice with Pakistani voters, and there is little doubt that she was a powerful and persuasive figure, despite her protracted exile.

There is little doubt that her supporters will use her death as a rallying point, to draw her party into greater prominence.