The two countries broke off diplomatic relations in 1980 after the Islamic revolution in Iran due to Cairo’s recognition of Israel and decision to provide refuge to Mohammad Reza Pahlavi, the deposed Iranian shah.
Positive track
Larijani said that a renewal of relations should not be rushed: “So far, we are on a positive track.
“The dialogue and the discussions are going on, but we should not be hasty.”
Al Jazeera said Larijani described Arab-Iranian relations as strategic and accused unnamed parties of seeking to disturb them.

Aboul Gheit said he and Larijani would review the present “conditions” of Egyptian-Iranian relations.

He said the nations were “still discussing every aspect related to bilateral, regional and security issues”.
During the four day visit, which ends on Thursday, Larijani also met Omar Suleiman, Egypt’s intelligence minister.
The pair asserted “the need for further diplomatic, cultural and security co-operation due to the sensitive security situation in the region”.
Presidential approval
Mahmoud Ahmadinejad, the Iranian president, said in May and on Wednesday that he is open towards renewing diplomatic ties which he says would be “in the interests of the two peoples”.
He said: “If Egypt announced its readiness, we would be prepared to reopen our embassy in Cairo today.”
Yet, Cairo offered caution, saying differences on security and regional issues needed rectifying first.
“Progress must be made on this before a resumption of relations,” Hossam Zaki, Egypt’s foreign ministry spokesman, said.
“Talks are continuing between the two countries to resolve questions preventing a resumption of full diplomatic relations.”
Source : Al Jazeera, News Agencies 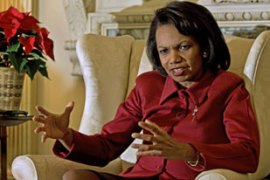 US softens stance on Iran

Rice stresses Washington will still use its power to achieve strategic objectives.