The defendants denied the charges, saying they were on a humanitarian mission to fly sick and destitute orphans from Sudan‘s Darfur region for fostering with European families.

Eric Breteau, Zoe’s Ark‘s leader, told the court: “I maintain what I’ve said since the start of this affair … our intention was to fetch orphans from Darfur.”

Defence lawyers had accused the Chadian court of rushing the trial under political pressure from the French government. They also said their clients were depressed.

“They feel the abyss just a few centimetres away, they are lost, completely lost,” they said.

Chad’s government maintains that Zoe’s Ark had been given no authorisation to take the infants out of the country.

Prosecutors said the group, led by Breteau and Emilie Lelouch, duped parents in eastern Chad into handing over their children with promises of schooling.

State lawyer Philippe Houssine said the sentences requested by the prosecution were justified because Breteau and Lelouch had shown no remorse.

Houssine told reporters: “On the contrary, he [Breteau] displays an arrogant, insolent attitude, which means this is a person who is ready to do it again if asked.”

The prosecutor requested that damages be awarded for each of the 103 children in the case $9m in all.

France, while calling the verdict a “sovereign decision”, said it would ask Chad to implement a 1976 bilateral judicial accord to allow the convicts to be transferred to serve jail sentences in their own country.

Pascale Andreani, a spokesperson for the French foreign ministry, said in Paris: “France, after obtaining the agreement of the members of Zoe’s Ark, and examining the implementation of the judicial co-operation accord between France and Chad, in particular article 29, will ask the Chadian authorities for the transfer of the prisoners to France.“

Gilbert Collard, a defence lawyer, criticised the sentence, saying there was no justice in Chad.

“I hope the French government will move to quickly bring home our compatriots, who have been caught in a trap,” he said.

Marian Coulibaly Indiaye, head of Unicef in Chad, refused to comment on the verdict, saying her organisation’s job was to serve the best interests of the chidren.

Indiaye told Al Jazeera that the children had not been reunited with their relatives yet, pending a green light from the concerned Chadian authorities.

It is widely expected that a deal between Paris and N’Djamena could soon return the aid workers.

France is an ally of Idriss Deby, the Chadian president, and has a military contingent stationed in the landlocked former French colony.

French troops have been supporting Deby’s forces against opposition forces in the east and will provide the bulk of a European Union peacekeeping force due to be deployed there in January.

Janine Lelouch, mother of Emilie Lelouch, told France‘s LCI television: “I think we have to hope that they’re transferred quickly to France because they can’t stand it much longer.”

The French have blamed their local intermediaries for misleading them over the identity of the children, who Chadian and UN officials said were mostly not orphans and came from villages in Chad on its eastern border with Darfur. 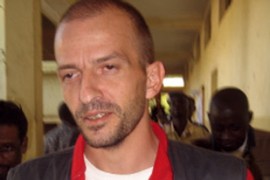 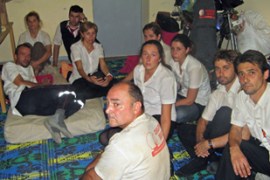