The incident happened about 15 minutes after the 5pm (0100 GMT Wednesday) closing time. It was not clear why the men were still at the zoo, or how the tiger escaped. Zoo officials declined comment.

“We can only guess what occurred here,” Smith said.

Police arrived to find the tiger on top of a victim. The tiger then started moving towards a group of approaching police officers, and they opened fire with handguns, Steve Mannina, a police spokesman said.

Authorities initially believed that three other tigers had also also escaped, but the animals have been accounted for.

The incident follows an attack in December last year when a Siberian tiger ripped the flesh off a zookeeper’s arm as horrified visitors looked on. 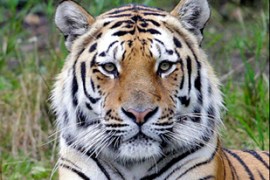 Young man is attacked by tiger that had escaped from its pen at San Francisco Zoo.