Residents are having to wade through neck-high waters and resuce attempts are hampered by the lack of access and heavy machinery.

The recovery of bodies is expected to take several days and the number of deaths is expected to rise.
In nearby Wonogiri district, one person was found dead and 17 others were missing when their homes were also hit by landslides after 12 hours of non-stop rain.
Julianto, a provincial official in Central Java, said that the landslides were the worst to hit the region in a quarter of a century.
Thousands of people have moved to shelters after their homes were buried or washed away. “The landslides took us by surprise,” he said.
“This is the first time in the last 25 years anything of this scale occurred here in Central Java.”
Thousands of houses were inundated on Wednesday, from Java to Sumatra to Sulawesi island, further east, witnesses and media reports said.
Eko Prayitno, a search and rescue chief, said hundreds of soldiers, police and volunteers are trying to get equipment to affected villages, but blocked roads are hampering their efforts.
Bridge collapse
In East Java, also experiencing heavy rains, at least 10 people were killed when a bridge was swept away by rising waters.

Andi Hartoyo, chief of police at Madiun district, told a local radio station: “Based on several witnesses, at least 10 people were swept away by strong currents as they were standing on the bridge when it collapsed.

“Local officials have been working on collecting data about missing people. We cannot start the search [for bodies or survivors] as the current is very strong now.”
On the tourist island of Bali, two Indonesians were killed in a smaller landslide. It hit their home in a village in Gianyar district.
A policeman said: “The victims were asleep when a hill collapsed and engulfed their house.”
The number of andslides in Indonesia is increasing as deforestation has meant that there is little vegetation to hold soil during the country’s tropical downpours.
It is a particular problem in densly populated Java, where many people live on flood plains and near rivers.
Source: Al Jazeera, News Agencies 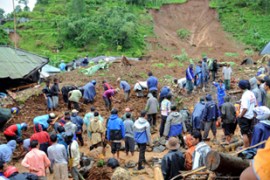 At least 81 people are killed as torrential rains cause havoc in Central Java.