Abiodun Orebiyi, the secretary-general of the Nigerian Red Cross Society, said the pipeline caught fire on Tuesday, while residents were scooping fuel from it.
Charred bodies
“From what people in the area have told our volunteers, it seems that there was a leakage from the pipeline and the people were trying to take advantage of that to scoop fuel,” Orebiyi said.
The Daily Trust newspaper reported on Wednesday that charred bodies littered the scene, along with buckets and jerry cans the victims had been using to gather fuel.
Such disasters are frequent in Nigeria, Africa’s most populous country and the continent’s top exporter of crude oil.
Nine out of 10 Nigerians live on less than $2 a day and many are prepared to take huge risks to obtain free fuel.
On December 26 last year, more than 250 people were killed in a pipeline blast in another area of Lagos.
Source: News Agencies 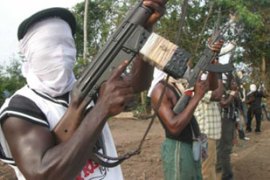 Mend announces end to ceasefire and denies reports its leader was arrested in Angloa. 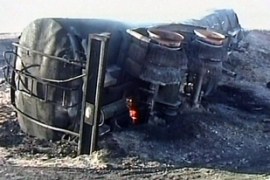 At least 100 other victims, mostly youths, are being treated for burns.