Shias complain of discrimination in the Sunni-led kingdom, a claim the authorities deny.
Al-Wasat, a local newspaper, showed pictures of police raids on parties and those arrested, including a man who was allegedly stabbed when being taken away.
The arrests have been said to have promoted further protests.
Economic inequalities
The government says the problems have been caused due to a lack of resources on the island, which is the Gulf’s least wealthy country.
An official from the interior ministry said those arrested were believed to have torched a police vehicle and stolen weapons from it during Thursday’s clashes.
“[Their charges] are criminal and they are not political activists,” the official told the state news agency BNA.
Police presence
A heightened police presence continued on Sunday, particularly around the northern Shia villages where many of the protests originated.
There are about 450,000 citizens in Bahrain, 70 per cent of whom are Shia, although the ruling family is Sunni.
Economic inequalities between the ruling elite and the poorer majority have caused dissatisfaction among Shias.
In the 1980s and 1990s Shias undertook violent protests against the government, which arrested and deported many of those involved.
Source: News Agencies 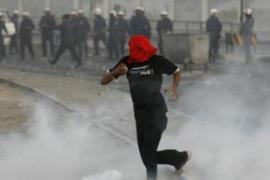