Fujimori, 69, is accused of authorising military death-squad killings of 15 people, including an eight-year-old boy, in Lima‘s Barrios Altos neighbourhood in 1991, and the  slayings of nine students and a professor at Lima‘s La Cantuta University in 1992.

Keiko, Fujimori’s daughter and a congresswoman, said her father regretted that the massacres took place during his administration but that he did not accept responsibility for them.

“On several occasions, he has said that he is sorry for the events that took place in Barrios Altos and La Cantuta, the same way he regrets the deaths caused by the terrorists,” she said.

She was referring to the Shining Path rebels who waged a campaign of massacres, political assassinations and bombings in the 1980s and early 1990s.

“This does not mean that my father assumes responsibility for it,” she told reporters outside the police base where Fujimori’s trial is being held.

Fujimori “had more than 15 years to ask the relatives’ forgiveness … but he didn’t do it,” Gisela Ortiz, whose brother was one of the students killed at the La Cantuta University, said.

Fujimori has denied having any knowledge of the death-squad’s activities.

He denies he ever authorised Vladimiro Montesinos, his intelligence chief currently in jail, to lead a dirty war against the Shining Path. 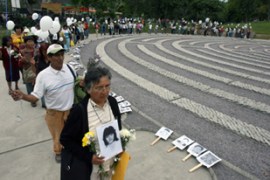 Fujimori to go on trial for murder 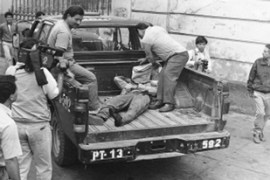