The Petrocaribe alliance, which grew to 17 countries on Friday with the admission of Honduras, has bolstered Chavez’s influence in the region since it started in 2005.
But the debt of Petrocaribe members to Venezuela has reached $1.16bn in little more than a year of supplies, and is estimated to rise to $4.6bn by 2010.
Recognising this, Chavez proposed debts be offset with local products and services.
Services for oil
He did not say how local products would be used to pay down debt, but he said it would be the same method used by Cuba, which pays for oil supplies with medical and other services.

“We propose adding to the financed portion of the oil bill a method of payment that includes the supply of a series of local products and services,” he said.

The Petrocaribe deal allows members to defer payment on 40 per cent of their Venezuelan oil bill for up to 25 years, with interest of only 1 per cent.
Dan Erikson, from the inter-American dialogue, told Al Jazeera that Petrocaribe had won Chavez friends in the Carribean, but that its impact was relatively small.
“Chavez tends to get much greater defference in the Carribean today than he did in the past, however, the Venezuelan president has various outreached programmes,” Erikson said.
Outreach
He added that the Carribean states were still often “charting their own course” on the world stage.
“If you look at most of the states engaged with this – aside from Cuba – they tend to be quite small states that relly on a variety of international partners,” he told Al Jazeera.
“The outreach to Venezuela is part of this overall stratergy of trying to globalise relations for Carribean states who need all the friends they can get.”
Critics say Petrocaribe is increasing the indebtedness of small Caribbean states still reeling from the loss of preferential markets for bananas and sugar in the EU.
While in Cuba, Chavez is also due to open a revamped Soviet-era refinery that will supply diesel, gasoline and jet fuel to members of Petrocaribe.
Chavez has helped keep Cuba’s battered economy afloat with 92,000 barrels per day of oil that Havana pays for with the medical services of thousands of doctors treating Venezuela’s poor.
Source: Al Jazeera, News Agencies 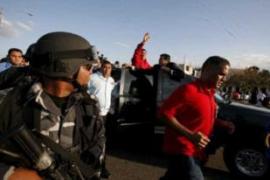