Hoey was also cleared of a series of other charges linked to bombings and murders on police and military installations across British-run Northern Ireland before the Omagh attack.

The dissident Catholic group was opposed to a 1997 ceasefire by the IRA in its campaign to force Britain to leave Northern Ireland.

The peace process was aimed at ending decades of sectarian violence between nationalist Catholics and unionist Protestants in the province.

Hoey was accused of engineering the 225kg car bomb that ripped through the County Tyrone market town.

A telephone call received by the authorities before the bombing said that explosives were on Omagh’s main street, but no precise information was given on the bomb’s location during the warning.

During the evacuation from the street, police officers unwittingly herded people towards the bomb before it detonated.

The only individual jailed for the Omagh bombing, Colm Murphy from the Irish Republic, had his conviction quashed by a Dublin court in 2005 but faces a retrial. 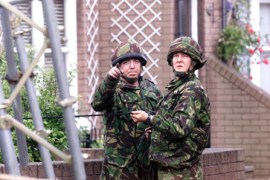 End of 38-year deployment is another boost for lasting peace in the province. 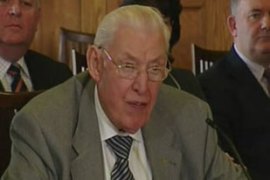 The swearing in of the ministers marks the transfer of power from London to Belfast.