“It had chains on the walls and ceilings, a bed still hooked up to an electrical system and several blood-stained items,” a statement said.

Graffiti on the building proclaimed “Long Live the Islamic State” – a reference to the kind of governance sought by groups such as al-Qaeda.

The floor was littered with food wrappers, plastic soda bottles and electric cables that snaked to a metal bed frame, presumably where detainees were shocked.

Nearby were nine mass graves containing the remains of 26 people.

Thursday’s violence occurred in the town of Kanan, south of the provincial capital Baquba, when a suicide bomber killed 13 Iraqis and a US soldier and wounded 25 others, including 10 US troops, officials said.

The attack took place as a patrol prepared to enter a building where local leaders were convening, the military said.

“A suicide bomber approached and detonated the explosives” he was wearing, the military said.

Captain Ahmed Mahmud of the Baquba police said the bomber had detonated himself at the office of a group fighting al-Qaeda in Diyala.

He said the bomber attacked as volunteers gathered to sign up to the Awakening group.

A number of groups fighting al-Qaeda known as As-Sahwa (Awakening) have mushroomed across Iraq‘s Sunni regions.

In another incident in Diyala, at least 17 suspected al-Qaeda gunmen were killed in clashes overnight with Iraqi and US troops west of Baquba, Mahmud said.

In the town of Hashmiyat, two Iraqi soldiers were killed when a group of gunmen attacked their outpost, police Major Ziyad al-Ani said.

And in the town of Abbara, north of Baquba, another Iraqi soldier was killed when armed men attacked his patrol, al-Ani said.

In the centre of the Iraqi capital, a car bomb killed three people and wounded 18 near the well-known Baghdad Hotel, security officials said. 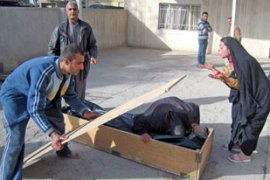 Up to 13 people are killed in attack on police recruitment centre.