Ng Kuok Cheong,opposition legislator, said: “Even though economic development is strong, the system is bad. There will only be more problems.”

Another protester said: “There are old ladies in Macau who push around rubbish for nothing.”

Mike Tam, 24, who joined the protest with a group of friends, said: “Now that the government has money, why can’t it help the poor? It’s inexcusable.”

Political unrest is rare in Macau, however activists have organised several large protests this year to denounce corruption and illegal foreign workers.

A protest on May Day this year was broken up by police firing shots into the air.

Macau held its biggest-ever corruption trial this year against Ao Man-long, a former transport and public works secretary, who was accused of taking tens of millions of dollars in kickbacks.

Edmund Ho, Macau’s leader, did not directly address democratic reform in a speech on Thursday marking the eighth year of Chinese rule, but he promised to step up communication with the public and “increase the transparency of governance”. 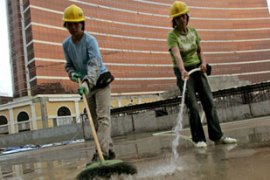 Ao Man-long is the most senior leader to be detained in the Chinese territory.