In “a best case scenario”, around 2,000 unarmed civilian police officers could also be deployed by January, Agwai said.

But this figure still falls far short of the numbers the UN Security Council had planned to deploy in Darfur, a region where 200,000 people have so far died and 2.5 million forced from their homes in four years of fighting between the Sudanese government and local fighters.

Agwai warned that even with a full capacity force, the mission would have been daunting.

“You realise how Herculean a task we are now facing,” he said.

UN officials blame Sudan for much of the delays, pointing out the government is holding up key equipment at customs and stalling on a “status of operations” under which peacekeepers can conduct their activities.

“If those agreements are not reached, the force will have great difficulties deploying successfully,” Agwai said.

Khartoum blames UN bureaucracy for being behind schedule.

The international community spends over $1bn a year to alleviate suffering in Darfur, but has shown reluctance in sending troops or equipment to protect civilians and aid workers, who face growing threats and lack of access.

This disparity is “very hard to explain”, John Holmes, the UN undersecretary-general for humanitarian affairs, said.

“We will make the best of a difficult situation.” 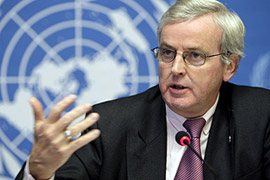 Holmes met the governors from northern and southern Darfur on Saturday to discuss Darfur‘s ongoing problems.

“We had to agree to disagree on issues such as security, lack of access and forced returns.”

Both governors denied that aid was being blocked from reaching large parts of the region. They also denied conducting a policy of forced returns to try to empty refugee camps.

A UN aid co-ordinator was expelled from South Darfur last month for reporting a police raid in a camp during which dozens of refugees were beaten and forced onto trucks.