The pro-democracy camp is looking for a boost from Chan, 67, the front-runner in public opinion polls, after a drubbing in district council elections last month at the hands of the biggest pro-Beijing party.
Universal suffrage
Chan made a name for herself as the first Chinese, first female head of the civil service under British rule, and she emerged from retirement a year ago to press for universal suffrage, disillusioned by the slow pace of reform.

Ip, 57, enjoys the support of the city’s powerful pro-establishment constituency, which is content to let Beijing decide when and how democracy should be expanded.

Ip is perhaps best known for trying to force an unpopular anti-subversion law through the city legislature in 2003 when security chief.
That attempt is widely blamed for sparking a protest that drew half a million people into the streets, shocking leaders in Beijing.
Currently, Hong Kong’s leader, the chief executive, is picked by an 800-seat committee under the influence of the Communist leadership in Beijing.
Constituencies
Half of the legislature is popularly elected, the other picked by “functional constituencies”.
The city’s constitution states that universal suffrage is the ultimate aim of political reform, but is vague on the timing and roadmap. Analysts say Beijing wants to delay as long as possible.
Chan and Ip both say they favour the introduction of universal suffrage by the next chief executive election, which is in 2012, but they differ on important technicalities, including how candidates could be nominated.
Analysts say a decisive win by Chan could give the democratic camp a boost in the run-up to a full Legco election next year.
Source : News Agencies 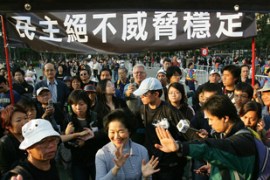 HK’s Chan to run in by-election