South Korean newspapers described Wednesday’s presidential election as a watershed moment in the country’s history and urged voters to go to the polls amid forecasts of a lower than normal turnout.
Thirty-seven million voters in the country of 49 million people are eligible to vote in the fifth election since the direct presidential ballot was restored in 1987 after years of military rule.
In the 2002 poll, turnout was 70.8 per cent, the lowest since 1987.
Unlike previous elections dominated by issues such as security policy with rival North Korea or relations with the US, this year voters were focused on economic matters due to concern over sky-high real estate prices, soaring unemployment and a widening gap between the rich and poor.
Economic concerns
Lee is pledging to boost the economy if he wins.
The former mayor of Seoul was also once a CEO with the Hyundai group and his campaign touted his business credentials.

But his business dealings could now come back to haunt him.

Prosecutors had already cleared Lee of wrongdoing in a stock manipulation case but parliament this week approved a new investigation.
The independent counsel is due to complete the probe before the February 25 inauguration, and Lee has promised to step aside from the presidency if found at fault.
Al Jazeera’s Melissa Chan, reporting from Seoul, said that while the economy was the biggest issue for voters this time, the repercussions of the ballot would go far beyond domestic issues.
The North Korean issue may have fallen by the wayside in the run-up to election day but the new president will set the policy agenda until 2012, affecting how peace and denuclearisation on the Korean peninsula plays out.
That, in turn, will help determine the extent of South Korean influence in the Asia region in the coming years, Chan said.
Lee Sook-Jaong, a professor at Seong Kyeun Gwan University, said Lee would “emphasise more on cross-consultations with the US government and also for support from the international community … as well as on a principled approach to North Korea”.
Lee has said he will take a more critical view over aid to North Korea and says he will bolster ties with the US, which has 28,000 troops deployed in South Korea.
In 2002, Roh Moo-hyun, who is constitutionally barred from seeking re-election, was elected after pledging not to “kowtow” to the US while also continuing the rapprochement with the North fostered by his predecessor Kim Dae-jung.
Despite a second meeting between the North and South Korean leaders in October, Lee is expected to reverse the “sunshine” policy.
Al Jazeera’s Chan said that could change the security situation among the two Koreas, their neighbours, and for the US – a situation that might eventually overshadow the economic concerns that have occupied South Koreans in this election.
Source: Al Jazeera, News Agencies 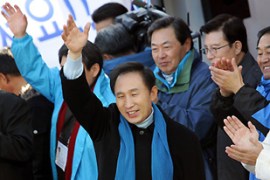