Tymoshenko, known for her stirring oratory during the 2004 pro-Western “Orange Revolution” and who was premier for seven months before being sacked by Viktor Yushchenko, the president, in 2005, heads an “orange” coalition of her own bloc and his Our Ukraine party.

Tymoshenko says she will uphold the ideals of the 2004 Revolution which pledged to move Ukraine closer to the West and eventually seek membership of the European Union and Nato.

She has said her priorities will be to clean up corruption still rampant in the country 16 years after independence from Soviet rule and proceed with economic, judicial and political reforms including a “clean” privatisation programme.

She blamed the outcome on tampering with the electronic voting system, although officials found no evidence for this.

Before Tuesday’s vote, Tymoshenko declared that the ruling coalition was solid.

“You have two patriots in politics who will hold this flag up high and never drop it. Today’s vote is a moment of truth for the democratic coalition,” she said.

However, the vote count indicated the difficulties ahead of the Yushchenko-Tymoshenko coalition.

The opposition dominated by the Party of Regions, which is led by Viktor Yanukovych,the former prime minister, is in a strong position to fight off initiatives by the coalition. 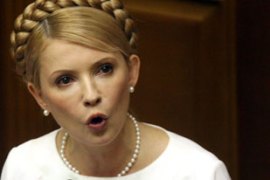 Parliament remains deadlocked over president’s nomination of his “Orange” ally. 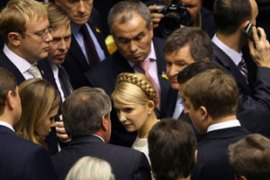 Orange Revolution leader misses out by one vote in parliamentary poll. 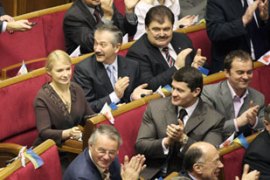