In the halls of al-Shifa hospital, the largest medical facility in the Gaza Strip, patients queue outside the dialysis centre for treatment and medication.

However, they know there is a good chance they may get neither. An Israeli economic blockade of the Gaza Strip has meant that medical supplies are scarce.

Umm Ahmed, 35, sits and waits next to her 10-year-old son who suffers from kidney failure.

“I have to wait several hours with my son for his dialysis, putting his life in constant danger,” she says.

Sami Abu Ali, the physician treating Umm Ahmed’s son, tries to comfort her, but acknowledges that the risk becomes considerable if they wait too long for dialysis.

“Patients who suffer from kidney failure must follow a certain schedule for dialysis, otherwise, the toxins in the blood rise to a life-threatening level,” he said.

In 2006, following Hamas’ win in parliamentary elections, Israel began an economic blockade on the import and export of goods into Gaza for security reasons.

The Israeli military says it fears arms and bomb-making material could be smuggled into Gaza and that bombs could be hidden in agricultural consignments destined for the West Bank and Israeli cities.

Earlier this year, Tel Aviv tightened the blockade at the crossings between Gaza and Israel, allowing only the most basic of food items and medicines into the territory.

Many of Gaza’s hospitals have fallen into a state of disrepair, leaving 1.5 million people with few healthcare options.

Israel has barred their travel to the West Bank, Israel or Egypt for treatment.

Abed Awad, a head nurse who supervises and arranges schedules for kidney patients, says that many of the dialysis machines have simply stopped working.

“There are 66 dialysis machines in the hospital. More than 30 of them do not work because they need spare parts that Israel has not allowed the ministry of health to import due to the sanctions imposed on the Strip,” he said.

Hospital managers have been forced to find ways to ration supplies and equipment and they have reduced the number of dialysis sessions per person.

Dr Basem Naeem, the health minister in Gaza, says the ministry suffers from a severe lack of medical equipment, instruments and medicines.

“Spare parts for equipment have all run out and, unfortunately, we do not have a clear vision on how to deal with this crisis,” he said.

“There are hundreds of patients who are in urgent need for medical attention, or operations abroad.”

On Saturday, two days before the Paris conference to resuscitate the battered Palestinian economy, Nasser Mohrah, 49, from Jabalia, died of cancer.

Spare parts for equipment have all run out and, unfortunately, we do not have a clear vision on how to deal with this crisis

According to his doctors, the Gaza interior ministry – in co-ordination with the Egyptian ministry of health – had given Mohrah funds and permission to pass through the Rafah crossing into Egypt for advanced treatment and therapy.

The Nasser Institute Hospital in Cairo had informed the Gaza interior ministry that they had the proper facilities to treat Mohrah.

But Israel prohibited him from travelling.

According to Gaza health officials, Mohrah was the 35th person to die of medical complications directly due to the Israeli blockade.

In a statement, the ministry of health said: “More than 450 patients [with] cancer, 400 patients [with] kidney failure and 449 of heart diseases live under threat of death under the siege of Gaza.”

The ministry said all have been denied travel by Israeli authorities.

The World Health Organisation says it has seen an increase in the number of patients not allowed to get emergency health care outside Gaza.

At a symposium hosted by WHO, the Physicians for Human Rights-Israel (PHR-I) organisation and the Gaza Community Mental Health Programme (GCMHP), Israeli doctors said that healthcare should be given even to persons considered security risks.

Hadas Ziv, the director of PHR-I, suggested an Israeli military bus could transport patients alleged to be security risks from Gaza to Jordan for emergency treatment.

Jamal al-Khodar, chairman of the Popular Committee against the Siege, has called on Israeli officials to immediately open the Rafah crossing to Egypt to alleviate the strain on the Gaza healthcare system. 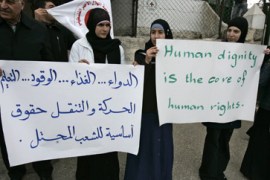