Modi and his Bharatiya Janata Party (BJP) remain favourites to win the state. Exit polls for the second phase of the vote on Sunday showed that the BJP would win but with a reduced majority.
Officials said there had been no reports of violence following an often angry build-up to the vote, but there had been problems with some electronic voting machines.
A total of 18.7 million people were eligible to vote in 95 constituencies on Sunday, out of 182 in the state. Results are expected on December 23.
Contrasting views
The religious polarisation which affects large parts of Gujarat was plain for all to see.

Analysts say Modi’s message still resonates in many of the state’s central and northern regions, and that could carry him home for a third term in office.
Muslims, by contrast, were unanimous in their opposition to the Modi’s leadership and continued BJP rule.
Muslims make up nine per cent of the state’s population, and feel they have been neglected and marginalised with the welfare of Hindus the Modi government’s only priority.
Political barometer
Gujarat, one of India’s richest and fastest growing states but also one of its most communally divided, is being closely watched as a barometer of the fortunes of the country’s two main parties – the Congress and the BJP – in the run-up to national elections.
Congress has been campaigning on the twin agendas of secularism and economic development in the state, with Sonia Gandhi, their party leader, denouncing Modi’s administration as a “merchant of death”.
They are due by mid-2009 but could come earlier,with the Congress-led ruling coalition in New Delhi teetering under pressure from key communist allies who oppose a nuclear-energy deal with the US.
Modi in focus
Modi stands accused of encouraging the riots in 2002 in which between hundreds of people, most of them Muslims, were killed.
He is contesting a seat in Ahmedabad and dominates political debate in the state.
Television channels showed hundreds of cheering supporters greeting him as he turned out to vote.
Shankarshan Thakur, editor of India’s Tehelka weekly, told Al Jazeera said Modi’s re-emergence would disappoint many people in the state.
“To me and a lot of the people here it is not a good thing that a man like Nerendra Modi should be coming back to power, because he has created a Gujarat that is totally divided,” he said.
“The Muslim population, which is about 12 to 13 per cent in this state, lives under threat all the time. They have no civil rights, many of them live in camps, they have no sense of security.”
Source: News Agencies 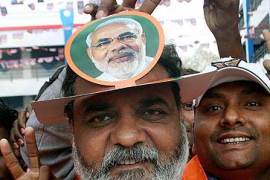