Slovenia’s presidency is largely a ceremonial post but the poll could provide an indicator of the direction the country is heading.

Since independence, Slovenia’s presidents have been left-leaning. A victory for Lojze Peterle, prime minister of Slovenia’s first democratically-elected government and the leading presidential candidate, would break this pattern.

Opinion polls published last week gave Peterle, who backed by the centre-right ruling coalition of Janez Jansa, the prime minister, 38 per cent of the vote.

Jansa’s conservative coalition won a parliamentary election in 2004, the year Slovenia joined the EU and Nato, and most parties in the coalition support Peterle. A victory for Peterle’s could help strengthen Jansa’s shrinking popularity.

However, none of the seven candidates are likely to gain the absolute majority needed to win the first round and the vote is likely to go into a run-off on November 11.

“Opinion polls showed that it is practically impossible for Peterle to get more than 50 per cent of the vote in the first round and I expect a very tight race in the second round,” Borut Hocevar, an editor at Zurnal 24 newspaper, told Reuters news agency.

Turk, who had 24 per cent support according to the polls, has the backing of the main opposition Social Democrat Party (SD), which  currently has wider public support than Jansa’s Slovenian Democratic  Party (SDS).

Zmago Jelincic, one of the rare nationalists in Slovenian politics, also stands a chance of making the second round with around 10 per cent in opinion polls.

The 59-year-old supports Slovenia’s membership in the EU but he wants it to withdraw from the Nato military alliance. Jelincic claims to be the sole candidate fighting for the national interest.

Official results will not be published until October 29, after votes cast abroad or sent by mail have been counted, the central electoral commission said. 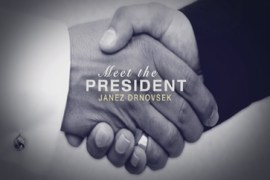