Scandal
The men charged were: Moises Roman Majonica, 36; Franklin Duran, 40; and Carlos Kauffmann, 35; all from Venezuela, and Rodolfo Wanseele, 40, a Uruguayan citizen.

The scandal erupted in August when customs agents in Argentina seized an undeclared $800,000 found in the suitcase of Guido Antonini Wilson, a Venezuelan-American businessman, when he arrived at an airport in Buenos Aires.

Antonini, who lives in Florida, was flying with Argentine and Venezuelan government officials on a jet chartered by the Argentine government.
After he surrendered the money and returned to Florida, Venezuelan agents pressured him to conceal that the Venezuelan government was the source of the money, according to an FBI affidavit.
US prosecutors said the Venezuelans told Antonini they represented top levels of government in Caracas and that the money was for a presidential campaign in Argentina. An accusation yet to be proven.
The intended presidential candidate was not identified, but Chavez had publicly endorsed the campaign of Cristina Fernandez de Kirchner, Argentina’s new president, who was sworn into office on Monday.
The FBI affidavit says Antonini was threatened that if he spoke out authorities in both Argentina and Venezuela would pursue him and that his children could be harmed.
‘Smear campaign’
Nicolas Maduro, the Venezuelan foreign minister, said in a telephone interview on state television that the arrests were part of a US campaign to discredit the Venezuelan government.
“This makes really clear the role… of the United States government which has been on this campaign since August trying to smear the relations of our governments in South America,” he said.
In August, the incident sparked corruption allegations against the government of Nestor Kirchner, then Argentinian president and the husband of the current president.
Caracas and Buenos Aires have close relations and Venezuela has invested heavily in Argentine government bonds.
Authorities in Buenos Aires did not offer a comment.
Source: News Agencies 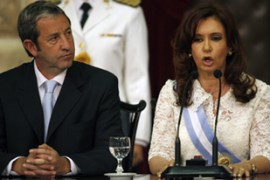 Cristina Fernandez takes over from husband pledging to tackle poverty. 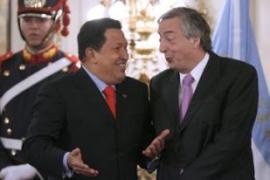 Businessman who carried $800,000 from Venezuela vows to co-operate with probe.