Prosecutors had wanted him sent to a federal prison for as long as 24 years.

Along with two other Canadian executives and a Chicago lawyer, Black was found guilty of misappropriating $6m after a sell-off of newspapers owned by his company Hollinger International Inc and related deals.

They were acquitted of nine charges that would have brought the total loss to $32m.

Before the sentence was imposed, Jeffrey Steinbach, Black’s lawyer, said that the media mogul would not “knowingly harm the company” as it would cost him as its principal shareholder.

“Those are not the actions of a robber,” he said.

Steinbach also cited “scores and scores of letters” sent to court from friends, family and others extolling Black’s virtues and urging mercy.

Black, a member of the British House of Lords, was also found guilty of removing boxes of documents from his offices in Toronto to prevent investigators from seeing them.

He has protested his innocence, claiming that he was the victim of “corporate governance zealots”.

Black’s lawyer has said it would be a “miscarriage of justice” if the verdict stood and has asked for a new trial. 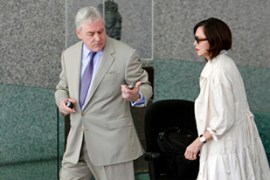