Uncertainty
Wednesday’s killings have heightened tension in Lebanon where the government and opposition are struggling over resolving who should become the next president.

Khodr said: “The Lebanese are asking what will be next, what will the consequences be of the latest political assassination.

“Local observers are saying that the military as an institution was a target, perhaps a message telling the army to stay out of politics.”

Al-Hajj, a 54-year-old Maronite Catholic and the military’s chief of operations, was considered the leading candidate to succeed the head of the military, General Michel Suleiman, if Suleiman was elected president.

Ban’s spokeswoman said: “The secretary-general strongly condemns this act of violence and terror on the Lebanese armed forces, a symbol of Lebanon’s sovereignty.”

Lebanese army investigators are searching for clues to determine who was involved in the assassination.

Local newspapers have said that al-Hajj, killed by a 35kg car bomb, may have been the target of fighters linked to Fatah al-Islam, an armed Palestinian group thought to have links with al-Qaeda.

Hajj had a leading role in the army’s 15-week battle against Fatah al-Islam at the Nahr al-Bared Palestinian refugee camp in northern Lebanon this year, raising some suspicions that the group may be behind his slaying.

The As-Safir newspaper quoted a senior military source as suggesting a possible link to the group.

“We are in front of a theory that the side which committed the crime may be smaller than al-Qaeda but bigger than Fatah al-Islam,” the paper quoted the source as saying.

The security council discussed Lebanon for the second straight day, stressing the importance of bringing to justice the “perpetrators, organisers and sponsors of this heinous crime”, as well as holding presidential elections “without delay”.

“No attempt to destabilise Lebanon should prevent the holding of a free and fair presidential election, in conformity with Lebanese constitutional rules, without any foreign interference or influence,” a statement said.

Zalmay Khalilzad, the US ambassador to the UN, said that the latest attack illustrated the need to quickly establish an international tribunal to try those responsible for the murder of Rafiq al-Hariri, Lebanon’s former prime minister.

The UN-backed court, which is to be based in the Netherlands, will try suspects in the assassination of Hariri, a five-time prime minister who was killed along with 22 others in a massive explosion in Beirut on February 14, 2005. 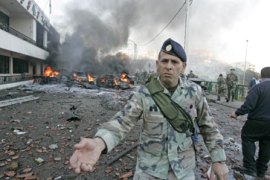