As political turmoil continues in Lebanon, observers say Hezbollah, the Shia movement, is re-arming and pursuing fresh recruits for its armed wing. Hezbollah has not denied this.

The movement was launched in 1982 in response to Israel’s occupation of southern Lebanon. Backed by Iran and supported for much of its history by Syria, its fighters carried out a series of suicide attacks against Israeli soldiers.

By the late 1990s, Hezbollah had developed into a political party and was funding schools, hospitals and social programmes for Lebanon’s often impoverished Shia population.

While the movement adapted to Lebanon’s political sphere, its armed wing, the Islamic Resistance, continued to attack Israeli forces occupying southern Lebanon until they pulled out on May 25, 2000.

In retaliation, Israel bombarded Lebanon for 34 days in an attempt to destroy Hezbollah.

However, in the aftermath of the war, Hezbollah now enjoys increased popularity, with more fighters signing up.

One such recruit spoke to Al Jazeera on condition of anonymity.

Mohammed, a 22-year-old architecture student, joined after the war. He was following in the footsteps of his brother and father, both resistance fighters.

Q: How did you get involved with Hezbollah?

First, when I was in university, I started to work with them [Hezbollah], participating in events and celebrations. Then it evolved to this point.

We, as Muslims, when we see oppression, we can’t accept it. That’s why I decided to get involved … I am not married and I am young. It is fairer for someone like me to be martyred. This is why I joined Hezbollah.

Q: What is Hezbollah for you?

The resistance, Hezbollah, is like the mother and the father.

We in the south [of Lebanon] were raised on the border of occupied Palestine. Only the resistance took care of us and defended us … I can tell you that Hezbollah is everything a person from the south dreams of when they dream of being defended.

We had a big problem in the south, we were forgotten by the government. Israel could attack us at anytime, but now Hezbollah is defending the people.

What happened last July affected me deeply. People’s steadfastness, the steadfastness of the men who had no idea what their fate would be … they were fighting so that my people can return to their homes.

These guys were 23, 24, 25 – in the prime of their lives with a big future ahead of them … They always knew that they had a bigger duty – the duty to defend their country.

I got to a point where I refused to sit on the sidelines.

These fighters, maybe their mothers or sisters or family members were killed and they were reacting to that loss. It is my duty as a citizen to defend my mother and my family.

Q: If you want to defend your land, why don’t you join the Lebanese army?

The Lebanese army doesn’t have weapons. It is not allowed to carry weapons because there is an international arrangement not to properly arm it.*

The Lebanese army has a mandate to protect this country, but the Americans and the Israelis are trying to change this mandate.

Q: If the Lebanese military was properly armed, would you join the army?

If the Lebanese army had weapons there would not have been a resistance because the army would be protecting Lebanon. The resistance was born because people were trying to defend their villages.

I work with the resistance because there is no proper army, but if there was an army then I would think of joining it.

If the army had weapons then everyone would go back to their lines and the resistance would have to rethink its defence strategy. This is what [Hassan] Nasrallah [the Hezbollah secretary-general] said. He said once we have a government then come back and talk to us.

Q: If the idea is to defend Lebanon and advance it, why don’t you put your efforts into rebuilding Lebanon?

Rebuilding my country is an honour as well. I work and I study. I fulfil these duties just as I fulfil my military duties.

There are two sides to the struggle – the military jihad and the other [social] jihad. Those who God gave the ability to participate in both should do so.

I will continue my life as normal and once my duty calls me I will go.

Q: If one day all occupied lands are liberated, what will your personal struggle become?

I would want to raise a family and send my children to university. There are many jihads in life, and the biggest jihad is the jihad of the Self.

For a person to be able to carry out the military jihad – to bear the pressure of knowing that he is going and he may never come back – his jihad of self is key.

His religion and his spirituality get him closer to God and away from earthly temptations. This will get him to a point where he can carry out his military jihad.

Our akeedah [belief in our cause], as I told you, is a fundamental thing. The akeedah is what allowed a single fighter in a village to fight 30, 40, 50 Israeli soldiers. Why? Because he won’t go back, he won’t give up. He would rather be martyred than humiliated. This is in the blood of the martyrs and this is why we have all these victories.

Q: How do you remember your life as a child growing up

I used to live in Tyre, like all the children in the south we used to hear Israeli jet fighters all the time, and we used to get scared.

single fighter … won’t give up. He would rather be martyred than humiliated. This is in the blood of the martyrs and this is why we have all these victories.

Once, when I was 11, we were playing football and a bomb fell very close to me. I remember I stayed up all night crying. When I was 10 they bombed a Palestinian refugee camp near us and we didn’t sleep nights on end.

We were forced to grow up before our time.

When you live in fear, it affects everything – your life, your studies. We were able to come and go freely but we were constantly scared.

I have been living in Beirut for 13 years … Beirut was safer, but you could still hear Israeli planes overhead, although it was nothing like the south.

In the south, Israeli warplanes used to show up anytime and do whatever they wanted … their soldiers kidnapped farmers and killed people.

Lebanon, as a whole, is under threat from Israel … Farmers can’t access their land, people can’t go to their homes because of cluster bombs.

The threat is there and it will remain there as long as Israel is our neighbour.

Q: How do your parents feel about you  and your brother being Hezbollah fighters?

It is normal for every mother to worry about her sons, but my mother knows this is our duty and we can’t run away from it.

She cries, she is sad, she misses us, she wishes our circumstances were different and we weren’t forced to go through this, that we don’t have any wars, but duty comes first.

She is convinced that whatever God wants, will happen. If I get martyred, she will only cry over my absence and because she will be separated from me.

Parents look after their children, and Hezbollah looks after the people of Lebanon. 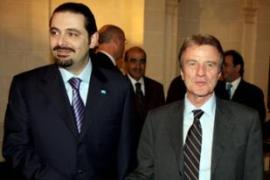 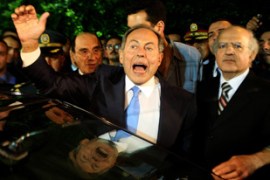 Deadlock as Lahoud steps down

Lebanese president’s term ends in political crisis and army in charge of security.