“I think however, that Karadzic and Mladic will be here, and I hope soon with the help of the European Union,” Del Ponte said at her farewell press conference as war crimes prosecutor.

The sharp-tongued Del Ponte steps down at the end of the month after eight years on the job to become the Swiss ambassador to Argentina.

“It is not a failure … not for me or the tribunal … it is only a question of time,” she added.

Mladic, the wartime Bosnian Serb military leader, and Karadzic, the former Bosnian Serb president, are wanted on genocide charges for the violent campaign of ethnic expulsions and persecution against Muslims and Croats during the 1991-95 war in Bosnia.

“It pains me to have to talk about the fact that Mladic and Karadzic are still at large. It is a stain on our work,” she said, reviewing her years in office.

During her time as chief prosecutor, Del Ponte helped the tribunal for the former Yugoslavia bring scores of war crimes suspects to court, including Slobodan Milosevic, then the Serbian leader.

Milosevic’s trial was the first time an acting head of state had been indicted for war crimes and is seen as Del Ponte’s greatest success, though he died in custody before judgment was reached.

Born in Lugano, Del Ponte became an investigating magistrate in 1981, working with Italian anti-Mafia judges, leading to her being targeted in a bomb attack.

Geoffrey Nice, a former Hague prosecutor known to have had a troubled relationship with Del Ponte, said “she did not prove herself either as a lawyer, a manager or a leader” and said she was wrong to meddle in politics.

“Nobody, neither in The Hague nor in New York, had control over her work or behaviour,” Nice told a Bosnian daily.

Del Ponte, who visited Belgrade 20 times to push Serbia to hand over suspects, was behind a positive report this summer that allowed the country to initial its first accord with the EU.

Del Ponte’s term officially ends on December 31 and her successor, Belgian prosecutor Serge Brammertz, will take over on January 1, 2008. 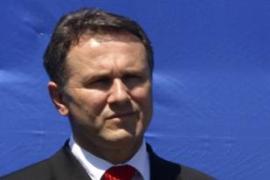 President of Serbian Republic within the Bosnian federation dies from heart attack.