The Chinese city of Nanjing is marking the 70th anniversary of one of the worst atrocities of the second world war in Asia.

On December 13, 1937, Japanese troops entered what was then the capital of China‘s nationalist Kuomintang government, beginning a campaign of mass murder and rape that lasted for six weeks.

The exact number who died in what became known as the Rape of Nanjing remains in dispute.

China says up to 300,000 were killed, many of them women and children.

Accounts of the brutality include pregnant women having their foetuses ripped out from them and bayoneted in front of them, while thousands of others were buried alive.

Japanese researchers have put the number of dead significantly lower, with some even arguing that the massacre never even occurred.

Thursday’s anniversary saw some 100,000 people attend a ceremony to open a new 25,000 sq metre extension to the Nanjing Massacre Memorial Hall containing documents, sculptures and a display of victim remains unearthed during its construction.

Air raid sirens rang out across the city, reminding residents of the bombing raids the preceded the Japanese takeover of the city.

Among those attending Thursday’s ceremonies were some of the handful of survivors still alive, for whom the memories are still strong.

“I saw bodies lying on both sides of the road, they were everywhere,” massacre survivor Xiang Yuan Song told Al Jazeera.

“The Japanese killed my brother and raped my sister. I can remember everything like it was yesterday.”

The legacy of the massacre has been one of the biggest sticking points in post-war relations between China and Japan, with many Chinese saying Tokyo has not fully atoned for past war crimes.

Tensions have been raised by accusations that Japan has tried to whitewash its wartime past in school textbooks, as well as visits by Japanese leaders to Tokyo’s Yasukuni shrine, which honours Japanese war dead, including several convicted war criminals.

But in recent months relations have shown a significant thaw, with a series of visits by senior leaders and a recent port visit to Tokyo by a Chinese warship – the first since the end of the war.

Underscoring the improved ties, Japan‘s recently installed prime minister, Yasuo Fukuda, has pledged not to visit the Yasukuni shrine, and early next year China‘s president is due to visit Japan – the first by a Chinese head of state in a decade.

As Thursday’s anniversary neared another massacre survivor, 88-year-old Cheng Yun, told Al Jazeera that while he could not forget what the Japanese did, he can now forgive them.

“We should educate the younger generation both in China and Japan to be more friendly towards each other in the future. We should never ever let such a tragedy happen again.” 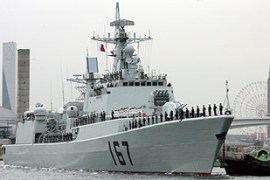 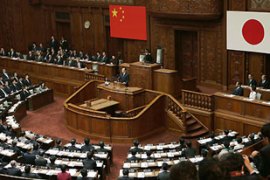 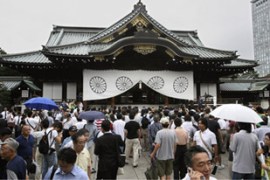