Gaddafi last visited France in 1973 and this is his most high-profile foreign trip since he began to rebuild bridges with the US and Europe four years ago.

Further stormy scenes broke out afterwards in the assembly as opposition politicians walked out of a debate on Europe in protest.

Jean-Marc Ayrault, the Socialists’ leader in parliament, said: “You do not roll out the red carpet for a dictator in the house of democracy.”

Rama Yade, Sarkozy’s human rights minister, denounced  the use of torture and arbitrary arrest in Libya, saying France should not be a “doormat on which a leader, terrorist or otherwise, can wipe off the blood of his crimes.”

However, Sarkozy got backing from Roland Dumas, the former Socialist foreign minister.

Dumas said: “Colonel Gaddafi has moved in the right direction. He is behaving in a way that brings him closer to the West … He has  understood that the world has changed.”

Sarkozy argues that since the Libyan leader had abandoned sponsorship of terrorism and the development of illegal weapons it is important to encourage him further down the path of international respectability.

Sarkozy’s invitation to Gaddafi has come under sustained attack from human-rights groups and politicians who accuse the  president of betraying France’s commitment to defend human rights.

Segolene Royal, the former presidential candidate, and Bertrand Delanoe, the Paris mayor, joined human-rights campaigners at a protest rally at the foot of the Eiffel Tower.

Royal said: “This visit violates the rule of morality. France must remain standing and not let its moral values be undermined.”

Sarkozy said he had asked Gaddafi for “progress on the path of human rights” during their talks on Monday, but this was denied by the Libyan leader in an interview with French public television.

Speaking to France 2 late on Tuesday, Gaddafi said: “First of all, President Sarkozy and I, we did not discuss these questions.”

He told the channel that “human rights are not an issue in my country,” which he said was governed by “direct popular democracy”.

Gaddafi also denied condoning terrorism in comments made at the EU-Africa summit in Lisbon at the weekend: “I never said that poor countries should resort to terrorism. I think my words were greatly deformed.”

On Monday, Gaddafi had been welcomed by Sarkozy at the Elysee presidential palace, where he initialled trade deals worth more than $14.7bn, including contracts for Airbus airliners, a nuclear-powered water desalination plant and construction projects.

In an important breakthrough for French arms manufacturers, Libya undertook to negotiate exclusively with France on a range of planned military purchases, including Rafale jets, helicopters, armoured vehicles and patrol-boats. 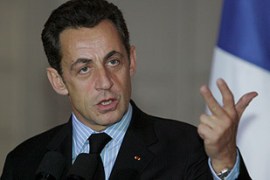