Eking out a living on the steep banks of China‘s Yangtze river, farmer Xiong Dao Cai, and his family make less than a dollar a day.

Life has never been easy, but in June their home was destroyed in a landslide, and things became much harder.

Now their only shelter is a tent.

As China‘s bitter winter sets in, the makeshift shelter offers little protection, and the government has given them nothing but empty promises

“It’s cruel,” Xiong says. “Now we haven’t got any compensation. I already borrowed more than a thousand dollars to try to rebuild my house, as well as my own savings.”

Liu Dai Guo, the village chief recalls the story of that day in June.

They awoke at 5, he says, cracks appearing in walls and floors of their homes.

Within a space of four hours, 54 houses had disappeared down the mountain side.

Thankfully nobody died and today all that remains are piles of rubble – nothing has been rebuilt.

“The foundation here is very soft – it’s soil not rock. When the lower part comes under increasing pressure from what’s above, then a landslide happens.”

The area around the Three Gorges is made up of steep mountains jutting out into the river.

They are not geologically sound and are prone to landslides.

It was built to provide electricity for the country’s booming economy and to control flooding on the Yangtze.

But since the reservoir behind the dam was flooded, raising the water level by 150 metres, it seems to have made a difficult situation even worse.

The combined weight of such a massive amount of water along 600 kilometres of the dam reservoir is huge.

Some geologists say that the downward pressure from the weight of water is causing the Earth’s crust to collapse, pulling the surrounding mountains in.

Last month 33 people died when the road along which they were travelling collapsed into the river.

It was only after digging through the rubble for several days that rescuers found a bus containing 27 of the victims.

The dam project is not due to be completed until 2009, and with the waters in the reservoir continuing to rise the outlook is not good.

“Can you guarantee now that at any time there will be no landslides at any place along the river? No, you can’t.”

All of which is bad news for the Xiong family. They may think it can’t get any worse, but it easily could. 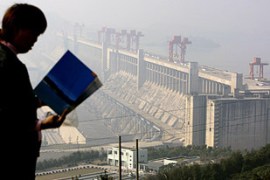 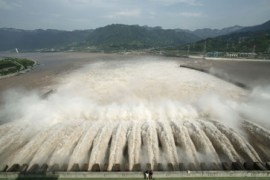