Contamination from South Korea worst-ever oil spill has spread to affect more than 50 kilometres of coastline, killing wildlife and devastating communities that rely on fishing and tourism.

Reporting from the hard-hit fishing town of Eui Hang, Al Jazeera’s correspondent Marga Ortigas said that by early Monday the length of coastline affected had more than doubled overnight as tons of crude was washed ashore.

Earlier South Korea‘s environment minister warned the huge clean-up effort was likely to drag on for at least two months.

Kang Moo-Hyun said the spill, caused by a collision between a tanker and barge on Friday, had caused serious contamination along a large stretch of coastline, with the oil sludge either glued onto beaches or sinking to the seabed.

The pollution has devastated wildlife and dozens of businesses along the coast of Taean county, where fishing, seafood farming and tourism are the major industries.

Oyster farms say they have seen their stocks completely destroyed while hotels which rely on tourist trade to what had been some of the country’s most scenic beaches are reporting cancelled bookings.

Ortigas said that it will take at least a decade to rebuild the oyster farms which had lost their stocks.

Many people are now calling for the government to provide urgent compensation.

At Mallipo, one of South Korea‘s best known beaches, waves of contaminated sea water have dumped a thick, stinking slick of crude oil along the shore.

The area is an important stopover for migrating birds and conservationists say the spill is likely to kill thousands of them.

About 10,000 tons of oil have leaked from the Hong Kong registered supertanker, Hebei Spirit.

The tanker was holed on Friday in a collision with a South Korean-owned barge which came unmoored from its tug in rough seas.

An international ban on single-hulled tankers is due to take effect in 2010.

By Sunday officials said the holes in the Hebei Spirit had been plugged and the remaining oil removed from the ship.

Police, members of the military, local residents, civil servants and volunteers have joined a force of almost 9,000 people struggling to clean up the coastline.

Government officials have said they are considering declaring the region a special disaster area.

Such a move would enable the central government to give financial aid to the local government to cover the cost of the clean-up, provide tax cuts to residents and allow them to delay loan payments to banks.

The slick is the word’s biggest oil spill in more than four years, since the taker Tasman Spirit leaked about 27,000 tons at the port of Karachi in Pakistan in 2003. 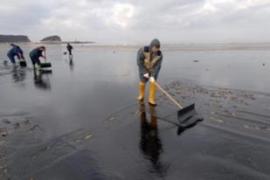 State of disaster declared as thousands of people struggle to clear oil slick. 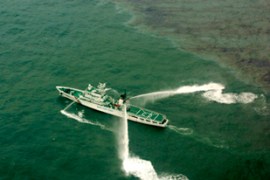