His remarks follow repeated warnings that the government was prepared to use the colonial-era Internal Security Act (ISA) which provides for indefinite detention without charge, long condemned as draconian by human rights groups.

His comments came after police arrested 21 people on Sunday including nine lawyers held for joining a banned march to mark Human Rights Day, which falls on December 10.

Malaysian law bans all public assemblies of more than five people except those with a police permit.

Speaking to reporters on Monday Abdullah, who will lead the ruling Barisan Nasional coalition for national elections next year, defended the arrests saying that streets protests were “not our culture”.

He pledged to work to ensure political and economic justice but warned protesters that inflaming racial tensions in Malaysia could lead the country to disaster.

Immediately after Sunday’s arrests, Ambiga Sreenevasan, president of the Malaysian Bar, said she was shocked by the police action.

“I am in a state of utter disbelief at the heavy-handedness of the police … these tactics are bullying tactics,” she said. “This is a sad day for human rights in Malaysia.”

On the same day 12 opposition members were detained in nationwide raids for participating in a banned rally on November 10 organised by Bersih, a coalition calling for clean and fair elections.

Syed Azman Syed Ahmad, a spokesman for the group, told The Associated Press that a second protest was planned for outside the national parliament on Tuesday.

On November 25, tens of thousands of ethnic Indians defied a government ban to protest what they say are racially-discriminatory policies that have been implemented for decades, claims the government denies.

Prosecutors have also charged 31 protesters with attempted murder after a policeman was injured during the rally organised by the Hindu Rights Action Force (Hindraf). 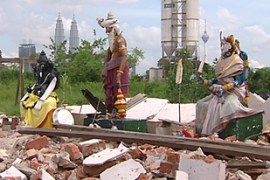 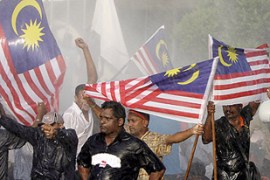 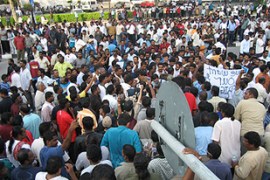