Anti-corruption prosecutors in September accused Chiuariu and Zsolt Nagy, a former telecommunications minister, of corruption in a property deal.
Requests to start an investigation were delayed due to procedural wrangling between the government and the president, who must approve any investigations of public officials or former ministers.
Prosecutors have accused Chiuariu and Nagy of abusing their positions after they sold property owned by the national post office to a private company reported to be linked to the ruling Liberal party, of which Chiuariu is a member.
Chiuariu and Nagy have denied the allegations and Calin Popescu Tariceanu, the Romanian prime minister, resisted pressure to fire the justice minister.
Chiuariu’s predecessor, Monica Macovei, who was widely credited with having pushed anti-corruption reforms was fired by the prime minister in April.
Chiuariu came under criticism from the European commission a month after his appointment when he called for the sacking of a senior anti-corruption prosecutor who was investigating several politicians.
Romania joined the European Union in January and has been told to clean up high-level government corruption.
EU sources have said Romania is failing to fight corruption.
According to Transparency International, a global anti-corruption organisation, Romania is the EU’s most corrupt-prone member.
Source : News Agencies 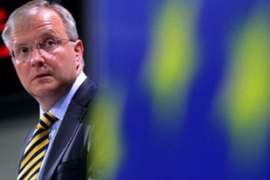 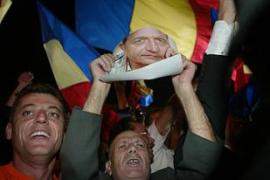 Traian Basescu survives an impeachment vote and stays on as president. 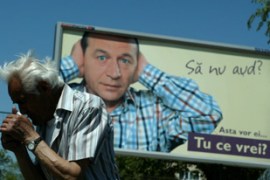 Traian Basescu easily survives a referendum on whether to impeach him.

Romania president to learn his fate

Traian Basescu is expected to easily survive a referendum on whether to impeach him.