Talks boycott
Thabo Mbeki, the South African president, later departed from his scripted speech and accused Merkel of being out of touch with the political situation in Zimbabwe, an African diplomat present at the meeting said.
Gordon Brown, the British prime minister, had already boycotted the meeting over Mugabe’s attendance.
The Zimbabwean leader is accused of rigging elections and of cracking down on opposition groups.
“I appreciate that some African states have tried to solve the crisis in Zimbabwe but time is running out,” Merkel told the summit.
Human rights activists, who had urged action at the summit on Zimbabwe and on the conflict in Darfur, praised Merkel’s comments.
Colonial row
Wary of China’s growing push into Africa, the EU has been keen to agree a new trade agreement after the expiration of existing deals at the end of this year.

But while the message from Europe was that no one would be pressured into agreement, Alpha Oumar Konare, the African Union commission president warned the EU to “avoid playing certain African regions off against each other”.

“It’s important we avoid patterns of thinking that belong to a different era,” he said hinting at Europe’s colonial past in Africa.
“No one will make us believe we don’t have the right to protect our economic fabric.”
Muammar Gaddafi, the Libyan leader, said Europe had to solve a problem it had created by colonising Africa.
“Either you give us back our resources or you invite us into your countries,” two EU diplomatic sources quoted him as saying in his speech on immigration.
John Kufuor, president of Ghana and current chairman of the African Union, said the summit would help break and move away from a painful past relationship that included slavery, colonial rule and apartheid.
“Europe needs Africa as much as Africa needs Europe,” Kufuor said.
A series of round-table talks was due to take place on Sunday morning before a closing ceremony and press conference where the leaders were expected to issue a joint communique.
Source : News Agencies 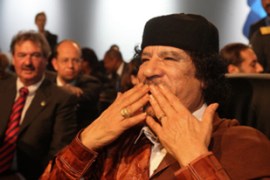 Leaders of 67 nations attend “summit of the equals” in Portugal.