Youth with a Mission, which has offices worldwide, trains young American and international students to become missionaries in Europe, Africa and Asia. Its Arvada premises employ 127 people, according to the group’s website.

“It is with great sadness that we report the shooting death of two staff members at our YWAM Denver [Arvada] training location,” the organisation said.

“Please pray – for the families who are on their way to Denver – for the critically injured young man undergoing surgery today – for the staff and students who have been evacuated to another location – for the apprehension of the gunman who fled the scene.”

The suspect was described as a white male, possibly 20 years of age. Police said that he was wearing a dark jacket and a dark “beanie” skull cap. He may have had a beard and may have worn glasses.

The second incident happened in the car park of the New Life Church in Colorado Springs several hours later.

Local television network KKTV said: “Early reports are that there is a gunman inside and that there are multiple victims.”

The shootings came after a teenager armed with a semi-automatic rifle opened fire on Christmas shoppers at an Omaha shopping centre on Wednesday, killing at least eight people before turning the gun on himself.

The incident in Nebraska revived the debate about gun crime in the United States, which authorities say is home to more than 200 million privately owned firearms for a population of just over 300 million. 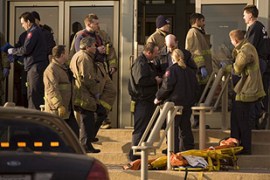 Shoppers killed in US mall shooting

Rampage by 19-year-old in Omaha leaves eight dead and another five wounded. 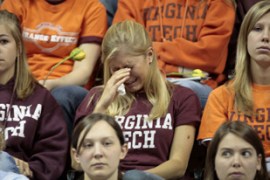 Four wounded in US school shooting

Suspended student goes on rampage with two revolvers before killing himself.