Now though he is charged with inciting mutiny alongside a former minister and elite special forces soldiers who were linked to organising the 2000 plot.

Speaking exclusively to Al Jazeera, Bainimarama said he was unperturbed by the latest events.

“This is not the first time there is a plan to have me assassinated,” he said. “But this should not stop us from doing what we think is right.”

No evidence backing up the charges against the 11 alleged plotters has been released publicly, but they have all been refused bail.

The allegations of the assassination plot add to political instability in Fiji a year after its fourth coup in two decades.

The plot has also raised tensions yet further between Fiji and neighbouring New Zealand, with one of its citizens, Ballu Khan, claiming to have been assaulted during an interrogation.

“It depends on what you call heavy-handed,” Bainimarama told Al Jazeera, adding that he was not present at the interrogation.

“I mean if he turns around and wants to assault one of the police officers and gets smacked in return, that’s not really heavy-handed to me.”

Khan’s lawyers say he did not provoke the military or police and have filed a lawsuit for $25m in compensation.

Laisenia Qarase, the elected prime minister overthrown in last year’s coup, said the handling of the alleged plot adds to concerns over the course of justice under the new government.

“People are considered to be guilty and then afterwards they try to find evidence to support their allegations,” Qarase told Al Jazeera.

Endemic corruption was one of the main reasons Bainimarama gave for launching the coup to oust Qarase’s government.

But no case has been brought against him.

Speaking to Al Jazeera he denied there had been interference from the military or interim government regarding those enquiries or the charges laid against the men accused of plotting to kill Bainimarama.

“When you have a government that’s basically aiding and abetting by not doing anything about it you can say the government is corrupt in itself,” he said.

“I mean turning a blind eye does not necessarily mean you’re not guilty,” he said of Qarase’s ousted government.

Bainimarama’s critics believe the alleged assassination plot is a deliberate tactic to extend the military’s grip on power by making Fiji appear too unstable to hold an election.

The commodore himself rejects those charges and insists Fiji will go to the polls and elect a new government, as he has pledged, in early 2009. 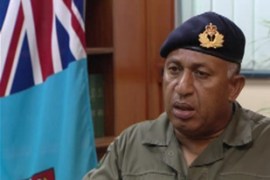 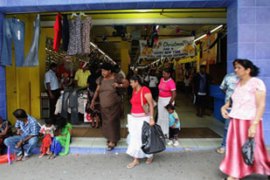 Fiji turns to China for funding

Nations say they will cut off aid to military government if democracy not returned. 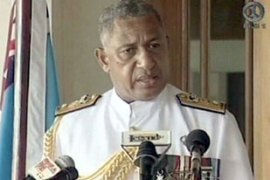