In the southeast of Bulgaria lies an area that, in ancient times, was the Valley of the Thracian kings.

Described by Greek scholars as savage, blood-thirsty warriors, the most famous of them was Spartacus.

But the Thracians were also artists of great skill.

Burial mounds housing the tombs of their rulers litter the landscape, many of them hiding priceless treasures.

The tomb of King Seuthus III dates back to the 4th-century BC.

But as the tombs in the valley are opened up, looters are competing with archaeologists to claim the country’s cultural heritage.

Seuthus’ crown and cup, which were dug up from his tomb, are proudly displayed in a local museum.

It was an incredible discovery, and the treasures have toured the world.

But Dr Georgi Kitov, the archaeologist who found them, believes the Bulgarian government must work harder to stop illegal digs or risk losing its priceless heritage.

Kitov said: “There is a law but it is being broken. The government need to make a serious law forbidding illegal digs and if people find artefacts, they must be encouraged to hand them in to the museum for a reward.

“Bulgaria is a poor country, the government doesn’t have the money to invest in history and culture, so many artefacts are being sold into foreign collections and no one knows they even originated from here. They are stealing our past.”

Volodya Velkov is the head of a special unit formed a year ago to tackle a trade that is now worth billions of dollars.

Velkov said: “The artefacts are stolen to order by rich Bulgarians living abroad and foreigners too.

They not only buy the pieces, but finance the illegal digs too. This is upsetting, as a Bulgarian, as a citizen of Europe. They are stealing our children’s heritage.”

In the basement of Bulgaria’s national museum a restoration team works tirelessly piecing together fragments of the past.

The country’s law states that everything found in the soil belongs to the nation, but only a few pieces make it into their hands.

Some that have include a 3rd-century set of ritual drinking vessels.

Made of pure gold and weighing six kilos they are priceless and irreplaceable.

The collection was saved for the nation by a farmer, but others are less scrupulous.

Al Jazeera reporters posed as buyers to see if they could find someone willing to sell them a valuable illegal artefact.

They were told by a local contact to go to a private courtyard belonging to a house filled with dealers and buyers.

Only coins were on show, although some were worth thousands of dollars

But when they heard what we were looking for, we were sent to meet a contact in a market.

After a brief conversation, the man assured us that if we returned on Monday, he would bring what we were looking for.

Al Jazeera left the deal there and then, but the team was never in any doubt that, for a price, it could have bought a piece of Bulgaria’s rich heritage. 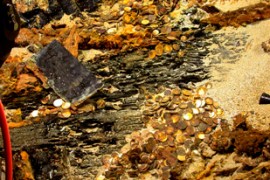 Gold and silver coins worth millions of dollars recovered from Atlantic shipwreck.

Italy: US museum took our treasure

Italy may break cultural ties with the J Paul Getty Museum unless progress resumes in talks to return what the country claims are looted antiquities.

British police say they have recovered a priceless ancient Peruvian headdress in London which had been stolen by looters almost 20 years ago.

From the eastern Dodecannese island of Mytinene to the northern provinces of Macedonia and Thrace, Islamic monuments long ravaged by weather and neglect are being restored to their former glory in Greece.