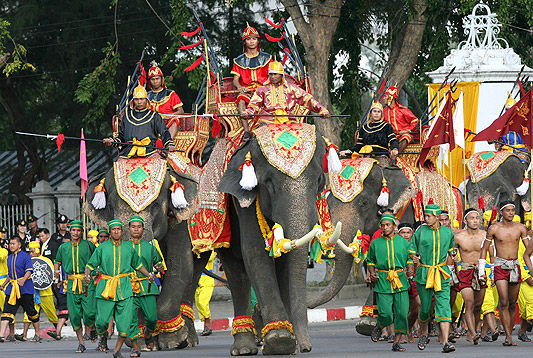 A week of lavish celebrations are underway in Thailand marking the birthday of the world’s longest serving monarch.

The much-revered King Bhumibol Adulyadej turns 80-years-old on Wednesday and celebrations began at the weekend with a military parade in Bangkok.

In preparation huge posters of the monarch have been put up across the country and many Thais will turn out dressed in yellow, a colour that is associated with Monday, the day with king was born.

On Tuesday evening the king is due to deliver an address to the nation in which he is expected to reiterate his calls for stability ahead of parliamentary elections on December 23.

In a speech on Sunday, he urged Thais to focus on unity after a year of instability and sluggish economic performance in the aftermath of a bloodless coup in September 2006.

He said the situation in the country was “unpredictable” and warned that without a sense of unity “the entire nation will face misfortune”.

The king also urged Thais to decide whether the country was important enough for them to maintain peace and stability.

“If the answer is yes, we should adhere firmly to honesty, reduce prejudice, nurture mercy and unite with each other. Whatever we do, national security should be the ultimate goal.”

The king’s actual birthday on Wednesday will be marked by sacred ceremonies and royal processions attended by tens of thousands of Thais, and a fireworks display at night.

Millions of Thais will also honour the king by performing meritorious acts such as donating blood and releasing captive animals including birds, turtles and fish.

On Sunday thousands of onlookers lined Bangkok‘s Royal Plaza dressed in yellow, shouting “Long Live the King” as he and Queen Sirikit passed by in a motorcade.

In recent months concerns have grown over the king’s health, but given the widespread devotion to him and strict laws banning any criticism of the monarch, few speak publicly of it.

Although Bhumibol is a constitutional monarch with no formal political role, he is seen by many Thais as a moral authority and unifying figure and has frequently brought calm during turbulent times.

In his six decades as king, he has taken an active role in rural development and is widely respected for his dedication in helping the country’s poor. 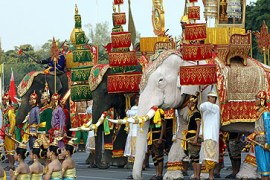 King Bhumibol calls for unity after year of instability traggered by 2006 coup. 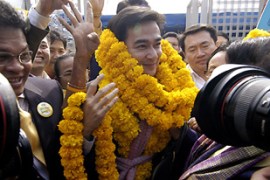 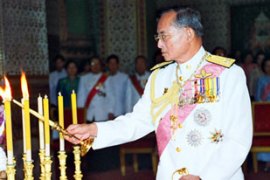 Revered king admitted after complaining of weakness on the right side of his body.