A detained Roman Catholic bishop was also temporarily released into the custody of another bishop, one of the prosecutors said.

Gloria Macapagal Arroyo, the Philippine president, branded the men “desperate” and said they were “blind to the will of their fellow Filipinos,” in a televised speech.
“Instead of striving under our democracy to unite the country, their actions only stoke selfish motives for self-interest,” she said.
“May the Filipino people take comfort in the fact that government institutions and civil society are strong and stable. The rule of law prevailed.”
Protest
On Friday, activists in Manila, the Philippines’s capital, took to the streets calling for Arroyo to be thrown out of office over alleged corruption and human rights violations.

But the protests were tiny in comparison to the “people power” movements that ousted presidents in the Philippines in 2001 and 1986.

Marga Ortigas, Al Jazeera’s Philippines correspondent, said the number of people demonstrating had grown to about 1,000 by the afternoon, but that many were not directly calling for the president’s removal.
“Anti-Arroyo sentiment was very strong, but not all the groups were there to protest against her,” Ortigas reported. “Some were labour groups that had planned to rally anyway.”
The police, who blocked protesters from approaching the presidential palace, said the activists added to two previously planned protests in Manila.
‘Failed coup’
The latest bid to oust Arroyo came on Thursday, when 14 soldiers walked out of their trial on earlier insurrection charges and commandeered the five-star Peninsula Hotel.
They were led by Brigadier-General Danilo Lim, a suspect in another failed coup plot last year, along with senator Antonio Trillanes, a former navy officer who was elected to the senate in May.
With them were dozens of sympathisers from within the military and leaders of opposition groups.
Lim issued a statement urging Arroyo to resign and asking the armed forces to withdraw support for her.
Police and the military surrounded the hotel, fired tear gas and volleys of gunfire into the lobby and drove an armoured personnel carrier through the hotel’s glass entrance doors.
Lim’s group surrendered after a tense standoff.
Source: Al Jazeera, News Agencies 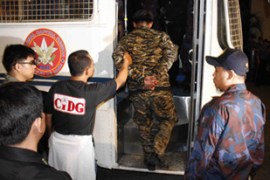 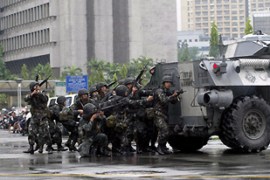 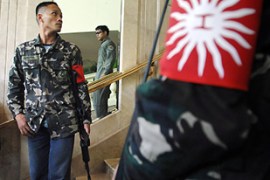