Aung San Suu Kyi made no mention of meeting the government’s conditions for talks, which include an end to her support for economic sanctions against the country.

But state television announced that the democracy icon would be allowed to meet leaders of her National League for Democracy on Friday – the first time in more than three years.

It added that General Aung Kyi, appointed as the government liaison with her, would meet Aung San Suu Kyi on Friday as well.

The opposition leader said her first meeting on October 25 with Aung Kyi had been constructive and that she looked forward to more regular talks.

She said she expected “this phase of preliminary consultation will conclude soon, so that a meaningful and time-bound dialogue” with the leadership “can start as early as possible”.
Gambari said earlier that he had managed to establish a path to “substantive dialogue” between the generals and Aung San Suu Kyi, whose party won a 1990 election landslide but was denied power.
Gambari was heading to New York, where he will brief UN Security Council members next week on his second visit to the South-East Asian state since the Myanmar government’s deadly crackdown of protests led by Buddhist monks in September.
The quelling of the revolt was the worst since a previous one in 1988 when some 3,000 people were killed.
The US called on Myanmar’s generals to respond to Aung San Suu Kyi’s statement and said it was “sorely disappointed” that the country’s leader, Senior General Than Shwe, failed to meet Gambari during the visit.
“We urge the junta to hear Aung San Suu Kyi’s call and desire to engage in constructive dialogue and hope that they will meet her soon,” Gordon Johndroe, spokesman for the White House National Security Council, said.
The UN said Gambari would return to Myanmar in coming weeks to pursue talks to achieve “prosperity, democracy and full respect for human rights”.
The government would also “make efforts steadfastly for national reconciliation with the correct co-operation of the UN secretary-general”, state media said.
Scepticism
But observers and rights groups remain sceptical.
“There’s no doubt in my mind that this regime has no intention of co-operating with Gambari or of starting a process of genuine political dialogue,” one Yangon-based diplomat said. “It’s beyond them.”
The military government shows little sign of bowing to pressure for political reform.
The day before Gambari’s arrival last week, the government said it would expel the UN’s top resident diplomat in Myanmar.
And during his visit, the government rejected Gambari’s proposal for three-way talks with Aung San Suu Kyi and the military.
It also accused the UN of being biased, interfering and subservient to US whims.

But the pressure is not going away as the world looks towards Asean leaders meeting in Singapore later this month to push for reforms in Myanmar, which is a member.

Human rights groups say that of 3,000 people arrested during and after September’s demonstrations, 600 are still behind bars and there is no indication yet about what Aung San Suu Kyi’s co-operation may mean for them. 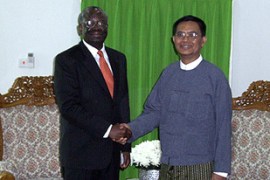