Charges against Zuma of bribery and fraud, tied to his role in an arms deal, were thrown out in 2006 after a high court judge ruled documents obtained during raids on Zuma’s home could not be used by prosecutors because the warrants used to obtain them were illegal.
But in a majority decision, the appeals court has said the warrants had proper legal authority, clearing the way for the evidence to be used in any future corruption trial against Zuma.
‘Political consipiracy’
Zuma is considered a candidate to lead the ruling African National Congress (ANC), due to elect a new leader next month.
But Thabo Mbeki, the president, who fired Zuma in 2005, has hinted he will run for a third term as ANC leader despite opposition from some ANC members and leftist allies.
The Zuma camp was quiet after the court ruling on Thursday, with the ANC releasing a brief statement, saying: “We respect the court’s decision. As we have consistently maintained, the law must be allowed to take its course.”
Supporters of Zuma, who is currently the ANC party deputy president, have described the corruption investigation as a political conspiracy to prevent him from winning the ANC leadership and ultimately the presidency of the country.
Source: News Agencies 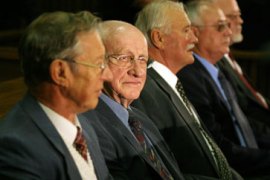 The trial of Adriaan Vlok has sparked fears that reconciliation will be blown apart.