Indonesia‘s president is calling on Myanmar‘s ruling military to speed up the process of democratisation and hold talks with Aung San Suu Kyi.

In an exclusive interview with Al Jazeera, Susilo Bambang Yudhoyono said he had written a personal letter to Senior General Than Shwe urging the military government to immediately open dialogue with the opposition.

“I keep telling my friends in Myanmar that a nation going through a democratic transition must be able to adapt, to respond to ongoing situations,” he told Al Jazeera’s Jakarta correspondent, Step Vassen.

His comments come as Myanmar‘s ruling generals face ongoing international pressure to step back from their bloody crackdown on anti-government protests.

Indonesia and Myanmar are both members of the Association of South-East Asian Nations (Asean), and diplomats say the generals’ hardline stance has caused growing unease within the regional bloc.

Urging Myanmar‘s military rulers to respond to international demands, Yudhoyono told Al Jazeera that they had to be “more flexible, more creative.”

“There is no single model for democratic transitions,” he said, adding “the most important thing is that all processes must be inclusive.”

As the largest country in South-East Asia, Indonesia carries considerable weight within the Asean grouping.

“In my reading Myanmar tries to set their own steps, their own transition time,” Yudhoyono said.

“So what we have to do is to push Myanmar to accelerate the process.”

The Indonesian president’s comments come as Asean prepares to hold a key summit meeting in Singapore later this month.

The meeting will be the group’s highest-level gathering since the crackdown on the Myanmar protests and comes as the group faces growing pressure to take action against one of its own members.

Myanmar has admitted that 10 people died when security forces moved to crush weeks of demonstrations in late September.

However, foreign diplomats and human rights groups say they believe the death toll was much higher.

In other topics discussed during the interview with Al Jazeera, Yudhoyono said that despite several recent arrests, the war against extremism and terrorism in his won country had not yet been won.

“Everybody knows that we are very serious in saving our own country. We have captured many perpetrators including the perpetrators of Bali bombing,” he said.

“Of course we have not won the war against terrorism but we have won many battles.” 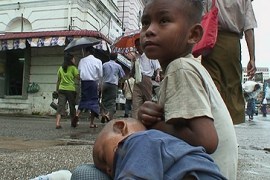