“Well over 600 party activists have been arrested and many of our leaders have gone underground. The crackdown is continuing,” senior party leader Raza Rabbani said.

Police sources confirmed the arrests of only 140 PPP workers.

Meanwhile a court in Karachi has charged three politicians and a trade union leader with treason for condemning Musharraf’s imposition of  emergency rule, court officials said on Thursday.
The four were remanded in custody for two weeks, two days after they were arrested for reportedly criticising Musharraf in addresses at the city’s press club, the officials added.
Treason, or sedition, can lead to the death penalty in Pakistan.
Protests planned

The PPP is planning to hold a public meeting in Rawalpindi, south of the capital Islamabad, on Friday to protest against the imposition of emergency rule by General Pervez Musharraf, the Pakistani president, last Saturday.

Bhutto has also threatened to hold a mass march from Lahore to the capital on November 13, unless Musharraf quits as army chief and holds elections in January as previously scheduled.
However, police have told Bhutto’s party they will not be allowed to stage rallies because of security concerns.
“All kinds of rallies have been banned because we have reports from intelligence agencies that seven to eight suicide bombers have sneaked into [the] Punjab,” Saud Aziz, police chief of Rawalpindi, told Reuters on Thursday.

Meanwhile, an anti-terrorism court in Lahore has granted bail to more than 300 lawyers arrested during protests against emergency rule, their lawyers said on Thursday.

Another 20 senior lawyers and rights activists reportedly remain in detention in the city.
Lawyers have played a central part in protests against Musharraf, after he attempted to oust Iftikhar Chaudhry, Pakistan’s chief justice, from office, sparking protests which led to the judge’s temporary reinstatement by the supreme court before his sacking last week.
Bush telephone
On Wednesday George Bush, the US president, said he had personally told Musharraf to call elections and to “take your uniform off”.
“You can’t be the president and the head of the military at the same time,” he said.
It was Bush’s first direct contact with Musharraf since the Pakistan president imposed emergency law.
Bush has been questioned on the soft stance taken on the military crackdown in Pakistan compared to the hard line when Myanmar’s ruling generals crushed peaceful demonstrations.
In defending his response to both situations, Bush said different tactics were required “to achieve the common objective” because Pakistan, unlike Myanmar, was, he said, already on the path to democracy.
Also on Wednesday, police clashed with hundreds of PPP supporters who tried to overrun a security zone by parliament in Islamabad.
Supporters of the Pakistan Muslim League Nawaz group, which is headed by Nawaz Sharif, a former prime minister, also protested against Musharraf in the city of Lahore on Wednesday.
Kamal Hyder, Al Jazeera’s correspondent in Pakistan, reported that members of the legal fraternity had also protested in Peshawar.
Vocal Bhutto

Bhutto, in her strongest comments since Musharraf imposed emergency rule, said on Wednesday that the world must make Pakistan’s military leader revoke his measures or tell him to quit.

“If he doesn’t, then I believe that the international community must choose between the people of Pakistan and him,” Bhutto said in an interview with British TV broadcaster Channel 4.
She returned to Islamabad on Tuesday, but said that a meeting with Musharraf was “not in her schedule during her stay in Islamabad”.
Musharraf and Bhutto had been in contact for several months prior to her return, discussing a possible power-sharing deal.
He granted her an amnesty on corruption charges in October to allow her to return home.
Source : Al Jazeera, News Agencies 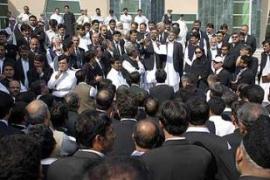 Ex-PM steps up pressure on Musharraf in Islamabad as Pakistan crackdown continues.